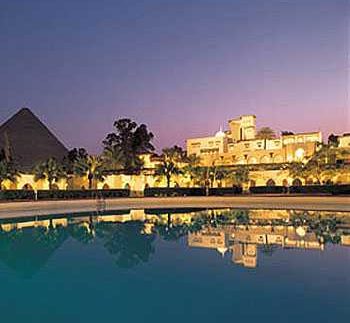 As one of the world’s top
travel destinations, Egypt has attracted some of the biggest names in
hospitality, providing elegant accommodations that are sure to impress even the
most seasoned travellers. We’ve compiled a list of some of our favourite luxury
hotels in Cairo
so that you can visit our city in style.

Cairo Marriott Hotel and Omar Khayyam: Once the Gezira Palace, the Cairo Marriott Hotel and Omar Khayyam
Casino is one of Cairo’s
most famed landmarks. Known for its Oriental decor and lush gardens in the
central courtyard, this Zamalek hotel offers one of the finest stays in Cairo. Its location in
this wealthy neighbourhood finds hotel guests in close proximity to many art
galleries, quality restaurants and shops. Grand ballrooms make the hotel a
popular destination for wedding parties, and the hotel’s casino draws quite a
crowd. Despite the hotel’s posh
atmosphere, down-to-earth dining can be had at both Roy’s
Country Kitchen and Harry’s
Pub.

Fairmont
Heliopolis and Towers: Close to
the Cairo International
Airport, the Fairmont Heliopolis and
Towers is the ideal accommodation for business travellers seeking an
extravagant stay in Cairo. With no less than fifteen dining outlets boasting a variety of cuisines and
international chefs, the Fairmont Heliopolis and Towers has something for every
guest. The massive atrium of the hotel lobby is filled with palm trees and
water fixtures for a decadent atmosphere rarely found in Cairo,
and its two swimming
pools provide cool refuge from the Cairo
heat.

Sofitel El Gezirah: In the
towering building that was once a Sheraton, French hotel group Sofitel now runs
one of Cairo’s
chicest spots. Positioned at the very
tip of the Zamalek island, the hotel provides an incredible Nile
view from all of its guest rooms. Sofitel’s infinity edge pool is a ground level haven of tranquillity,
while the floating lounge and restaurant Le Deck
allows guests to dine right by the river. International nightclub franchise Buddha
Bar has its only Cairo
branch at the Sofitel, while French fine dining can be sampled at Vendome.
With a beautifully appointed lobby, cosy guestrooms and on-point service,
Sofitel has luxury-seeking travellers returning time and time again.

Fairmont Nile City: A relative
newcomer to the ranks of Cairo luxury hotels, Fairmont Nile City
is one of the swankiest luxury hotels. Business and luxury travellers flock to
the Fairmont Nile City
for its understated luxury. The simple yet stately guestrooms are some of the
most comfortable accommodations in Cairo. Napa
Grill offers supreme Californian cuisine and Saigon
Bleu serves decadent French Vietnamese cuisine, while the recently opened Champagne
Bar adds an extra touch of elegance to the city. The 25th floor rooftop
pool is ideal for a tranquil swim and sunbathing session high above the
chaotic city below.

Intercontinental Semiramis: The
recently refurbished lobby of the Semiramis hotel in Garden City has brought a
new sense of elegance to this popular establishment. The rooftop lounge of this
hotel continues to draw crowds for its incredible Nile
view. Fine dining from restaurants such as The Grill Restaurant and Lounge and
quiet evenings at the Ambassador
Club add to the hotel’s classy atmosphere.

Mena House Oberoi: For a
luxury hotel with a history, look no further than the Mena House Oberoi. With
an unbeatable view of the pyramids, the hotel has long been a destination of
the rich and famous. What began as a hunting lodge for Khedive Ismael and his
guests would eventually become one of the most desirable accommodations in Egypt. Opulent
Oriental decor with touches of British elegance gives the Mena House a uniquely
elegant atmosphere, with restaurants The
Moghul Room and the Khan El Khalili
café offering the cuisines of different cultures in an exquisite setting.

Grand Hyatt: One of Cairo’s top views and fine
dining experiences is found at the Grand Hyatt’s Revolving
Restaurant, which is only one of the hotel’s many international and locally
inspired restaurants. Located in Garden
City, the hotel boasts more than 700 guestrooms and suites all comfortably
furnished for Nile view elegance. It is also the only dry hotel in Cairo,
making it a favourite among conservative families travelling from around the
region. However, the Hard Rock Café and
the revolving restaurant do serve alcohol. Amenities such as a freshly
refurbished rooftop pool and a private yacht the Marquis make the Grand Hyatt
one of the most sought after hotels.

Kempinski Nile Hotel: The
newest of the luxury hotels in Cairo
comes from boutique hotelier Kempinski. Having opened its doors in early summer
2010, the Kempinski is much smaller than most of Cairo’s top class hotels. However, this is
hardly a limitation; each of the intimate guestrooms and suites is appointed
with a private butler for the highest quality of personal service. Fulfilling
your every desire is a theme that the Kempinski name takes seriously; one of
their restaurants Blue
has no menu, allowing the guest to choose whatever they want to eat. The
hotel’s Turkish restaurant Osmanly offers
some of the best cuisine in Cairo,
while the Chocolate
Lounge serves sweet escapism to their chic clientele. Patrons can relax over cigars and malt at the
Jazz Bar or enjoy wine and cheese on Floor Ten’s Nile-side balcony.