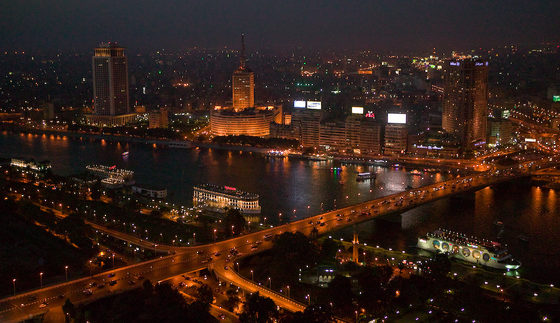 Finally, our favourite holiday of the year has arrived! Eid El Adha usually sees th majority of Cairenes scurrying to Egypt’s beaches, but there’s plenty going on in the capital.

Thursday is a dry night, which means several of Cairo’s venues are taking the night off, but there’s still plenty of live music in the capital. El Sawy Culturewheel hosts performance by one of Cairo’s most unique bands in Maghna Khan. The group have garnered a cult following withe their distinctive brand of folk music.
That’s not all at El Sawy, though. The concept of stand-up comedy has taken its time in coming to these shores; a surprise, considering Egyptians’ commitment to horseplay and tomfoolery. Tonight, El Sawy opens its stage to the city’s brightest amateur comedians.
Also taking to the stage tonight is NAAS. The theatre troupe will perform one last time this week at Rawabet Theater. ‘The Visit’ has been adapted from ‘The Over Night Visitor’ by contemporary Greek playwright, Loula Anagnostakis. As the first of a series of three one-act plays, Anagnostakis tells of a society where two generations’ differing fears lead to conflict – a theme that has dominated Egyptian politics over the last year.
Another huge part of Egypt’s history is diaspora; a theme explored in 2011 Italian film, Il Villaggio Cartone. Screening tonight at the Italian Cultural Institute in Zamalek, the film tells the tale of how a group of illegal immigrants seeking refuge set up their own village in an empty church.
For something a little lighter going into the Eid weekend, the Kempinski Nile hotel’s Jazz Bar welcomes soulful diva, Michelle Rounds, for another laidback, sultry night off music. It’s that or Ahmed Harfoush at the Fairmont Nile City’s Saigon Restaurant & Lounge – tough choice.
Miss Rounds and Mr Harfoush will also be performing at Jazz Bar and Saigon, respectively, on Friday – they just doesn’t stop. There’s plenty more live music, starting at After Eight, where contemporary Egyptian music group, Talta Talet Band, performing. Elsewhere,  DJ Madlou is at Cairo Jazz Club for another dose of house music, while Sufi hosts a screening of 1997 classic, Life is Beautiful.
Egyptian national holidays bring out the culinary best in Cairo, and La Gourmandise in Giza’s First Mall is offering a special Eid brunch for 180LE per person over the whole weekend.
Saturday sees Cavallini celebrate Eid with DJ A.R’s house and commercial beats, while Cairo Jazz Club welcomes indi-pop satirists, Salalem, who will follow debutant singer, Sara El Gohary.
More great live music comes in the form of Syrian artist, Zeid Hamdan, and Cairo’s own Maryam Saleh. Critically acclaimed in their own right, Hamdan and Saleh collaborate at El Sawy Cuturewheel with their unique trip-hop act. Also filling the halls of El Sawy is the sounds of alternative Egyptian band, Marasy. Elsewhere, No Comment returns to After Eight, performing their peculiarly popular shaabi-rap.
Last, but certainly not least, Cairo Opera House continues it series of live screening from the Met in New York. This time it’s Verdi’s Otello.
The weekend doesn’t end there! Make the most of your Sunday off with Basheer at After Eight, the Amro Salah Trio and Noha Fekry at Cairo Jazz Club and Black Theama at El Sawy Culturewheel. The festivities continue on Monday, with DJ Feedo and DJ Hook spinning the biggest urban hits at Arabesque, while Cairo Jazz Club offers a DJing duo of its own; NeoByrd and Hady Tarek are two of Cairo’s leading electronic music masters.
The long Eid weekend is a great time to soak up some art, and there’s certainly no shortage of it. The Ahmed Basiony commemorations continue at Darb 1718 with ‘Ahmed Basiony: Retrospective’, ASCII’s ‘Sound Art Archive’ and ‘Ahmed Basiony: Thirty Days of Running’ at Sharja Art Gallery.
Elsewhere, ‘The Virus is Spreading’ moves into its last week at Safar Khan Art Gallery as does Townhouse Gallery’s Amal Kenawy Exhibition.
This is just a snapshot of the events in Cairo this Eid. Check out the Cairo 360 events calendar for more.