Downtown Cairo: On the Brink 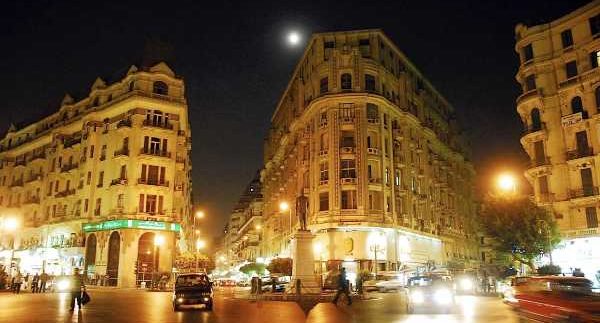 When you think of Downtown
Cairo, dirty streets lined with ahwas, intense honking, dripping air
conditioners and dilapidated buildings often come to mind. If you’ve taken the
chance to stroll through the area of Bustan or peruse the bookstores and
galleries nearby, however, you quickly realize that there’s much more to Downtown
than what meets the eye.

The art scene is
lively, historical landmarks can be seen on nearly every block, and the
neighbourhoods are bursting with culture; all playing part in the historical area that was once rich with beautiful buildings and various sites, stemming
from the Belle Époque era of Downtown’s beginnings.

Sadly, poor upkeep
and irresponsibility have left the once gorgeous Neo-Islamic and Art Deco
architecture literally crumbling before the eyes of any passerby. Groppi and Café Riche, once meticulously decorated and home to many artists, are now nothing
more than drab stopping points for wide-eyed tourists grabbing a bite to eat.

While the elite are
turning themselves over to gated suburban life in an attempt to cure their city
moroseness, the majority of Downtown has suffered aesthetically, as the area’s
upkeep hasn’t been on the priority list, to say the least. While Downtown, in all of
its glory has been unabashedly neglected over the years, there are a few
individuals who have taken it upon themselves to begin a revitalisation process;
a revival that entails preserving the beauty that is left while creating new
extensions of growth for both business and residential options.

Over the past few
months, rumours have been running through the mill that Wist El Balad is
on the brink of what they deem as gentrification. Gentrification usually entails
private investors coming in and purchasing property in less prosperous
communities. While gentrification can be a positive change for both investors
and the community alike, as a result, members of the community are often forced
to vacate their homes due to the rise of housing prices and property taxes.

Whether it is revival
or gentrification, the fate of Downtown’s cultural livelihood could possibly be
resting in the hands of private investors. While they ensure that they have a
solid plan for working with tenants and arranging compensation as well as
incentive, there seems to be an underlying concern that the project will, in
the end, cater to an exclusive segment of society; changing the entire dynamic
of Downtown’s space and its magical energy, which flows from the
eclectic mixture of people residing and working in the surrounding area. For
positive change to occur responsibly, it’s of upmost importance for the local
community to be both involved in the project and aware of investor’s motives.

Al Ismailia Real
Estate is a local investment company that has met recently with local papers
and various groups to get the word out and make their goals for urban renewal
clear. Thus far, the firm has already acquired a number of buildings Downtown, including
the Viennese building as well as the building that Café Riche occupies.

Seeing as
how they’re still in the acquisition phase, only sixteen buildings have been
purchased thus far, yet they plan to acquire around
15% to 20% of Downtown’s space. Considering it’s a rather large and optimistic target,
the project’s effect on the area’s community should not be taken lightly.

With
the idea in mind to first acquire the buildings and then refurbish and rent out again; the investors’ goal is to introduce new entertainment venues,
such as bars and restaurants that cater to a wide range of individuals. The Ismailia
group has also expressed their full support to the local art scene and plan on
partnering with various groups, including CAC and Townhouse Art Gallery, to help
in keeping the Downtown arts scene booming.

Regardless of the
rumours and potential outcome of the massive project, it has begun to publicly
shed light onto a serious concern; not only the importance of taking delicate
care of Downtown’s historical architecture, but the project also raises
questions as to where exactly the future of Wist El Balad is headed.

Whether this
acquisition project is on the brink of another classist scenario or a true
preservation of Downtown’s beauty and rejuvenation; only time will truly tell.