The success of Azza Fahmy continues to spread the brand across the globe and, in Egypt, Azza Fahmy has become a household name and with the opening of a new store in Sheikh Zayed’s Galleria40 suggests that the Azza Fahmy steam train isn’t stopping anytime soon.

Cairo 360’s Hend Salah caught up with the woman of the hour at the store’s official opening, but there was one more reason to celebrate as Azza Fahmy’s collaboration with the British Museum was revealed to the public for the first time

You studied in the UK with the help of the British Council, you worked with Matthew Williamson a couple of years ago and now with the British Museum – is there something about British culture that speaks to the Azza Fahmy brand?

British culture is very rich and I’ve always firmly believed that we must, and need to, learn from different cultures to evolve in our own unique way. But it’s not about being inspired by a certain culture, necessarily; it’s about learning new ideas and approaches and applying them in our own way.

How did the collaboration with the British Museum come to be?

This collaboration goes way back. The British Museum houses an exhibition named Faith after the Pharaohs and they approached us to design four or five pieces for them, which we did. The pieces combine traditional Pharaonic styling and iconography, with a touch of European flair.

What do you look for in a collaborator?

I always try to learn something new; I don’t just look at what a collaborator can bring to a project, but what I can learn from working with that person or institution.

The Azza Fahmy name was born back in 1969 – how has the brand changed since then, if at all?

The brand has changed greatly. As I mentioned earlier, I seek new knowledge all the time, so with that approach the brand has naturally changed and evolved as I and the other designers have. 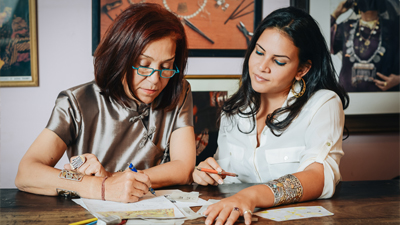 What’s the key to (or what are the cornerstones of) the longevity of Azza Fahmy as a brand?

I would have to say dedication and passion in our work; just as in life, these two things are the most powerful tools in overcoming challenges.

The new Galleria40 store is a bit different to the others – tell us a little bit about it.

The new store is designed with shoppers in mind; we wanted to provide the ultimate jewellery shopping experience. Colour-wise, we’ve taken inspiration from traditional Pharaonic tones of blue, brown and beige, which make the featured boudoir-style vanity corner, bespoke consultancy lounge and in-store library all the more welcoming. As our designs evolve and develop through time, we also develop our stores to match the new shape of the brand. 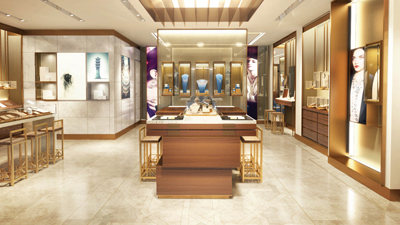 There are some exciting new collections on the way and I’m also working on a new book. But one of the things I’m most excited about in 2016 is a project I’m working on with the government to start a vocational school that can act as a platform for those looking to get into jewellery arts and design.