If things have gone out of your hands, and spending Eid in town has become a fact that you will have to live with, worry not, for we are bringing you some of the events that are taking place across Cairo during Eid. Here’s the deal:

Monday starts with a karaoke night at ROOM Art Space, while El Sawy Culturewheel hosts a day called Galacticon, where every avid comic fan is welcome to join a day full of endless activities, including cosplay, games and more.

Before getting excited about how wild you’re going to party this Monday night, we’d like to remind you that it’s going to be a dry night. You can get high on music instead at The Tap East, where DJ Kashouty takes to decks, at The Tap Maadi, or The Tap West that are hosting Shuffle Night. Alternatively, DJs Hossam Jamaica, Dozee, Tariq Siddiq and Ali are on the menu at 24K, on a night called Tech it Up.

Tuesday, or the first day of Eid, sees various parties taking place across Cairo;  Conrad Cairo’s Stage One hosts a night, where local guitarist, Sherif, takes to the stage along with percussionist, Hamdoon, while Cairo Jazz Club hosts a special house night, where Mineral Kult and Shawerma take to decks. Elsewhere, Cairo Jazz Club 610 sees a night of funk, where Bakir hits the decks.

As for Wednesday, ROOM Art Space hosts another edition of their game night, courtesy of board games catering company, Boards Kingdom, while Cadre 68 hosts a double screening of La Vie en Rose, which tells of the eventful life of legendary French songstress, Edith Piaf. 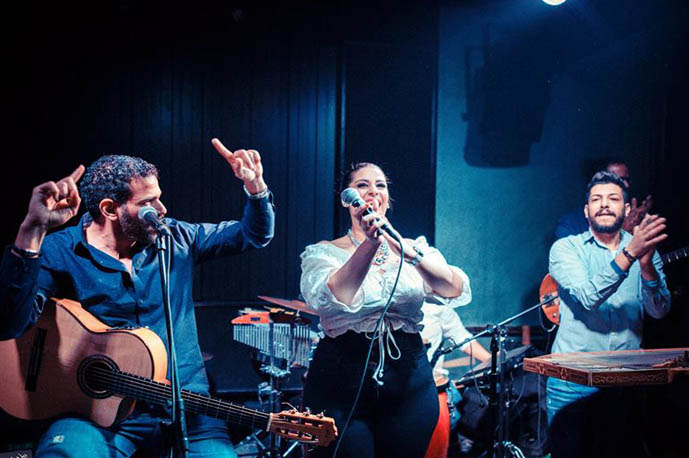 This Wednesday, Basata takes to the stage at Cairo Jazz Club, for a round of Arabic Contemporary tunes (Photo: Basata / Facebook)

Elsewhere, hip-hop and R&B music is on the menu at Cairo Jazz Club, where A.K. takes to decks, and at The Tap East too, but courtesy of Fat Sam, while it is all about house music at The Tap Maadi, where Ellol is taking to decks. It’s a whole different vibe at Cairo Jazz Club 610, because local band, Nour Project, take to the stage for a round of jazz songs, before another band, Basata, take over for a round of Arabic contemporary tunes.

When Thursday comes, Ezz El Ostool takes to the stage at ROOM Art Space for a round of rai and Sufi numbers, Hysteriatone perform a number of anime rock songs at El Sawy Culturewheel’s River Hall, while classic TV show, Friends, is set to be screened at Irth, in Downtown. 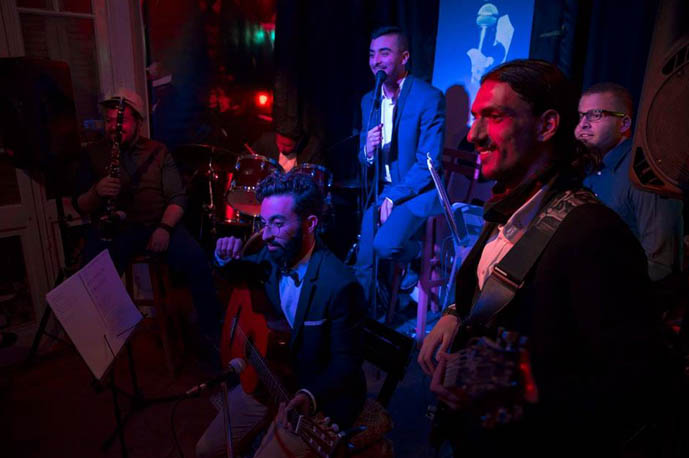 The Sinatras are set to take over at ROOM Art Space to cover some of Frankie’s classics (Photo: The Sinatras / Facebook)

Friday sees a night of classics at ROOM Art Space, where The Sinatras’ Soiree takes place, while El Sawy Culturewheel hosts a night of Arabic contemporary music, where Yasmine Ali heads to the stage. Hip hop is taking over this Friday; DJ Mobbz hits the decks at The Tap Maadi; Feedo takes over at The Tap West, while Teddy is on the menu at The Tap East. Elsewhere, Aly Goede and Kitchen Crowd are taking to decks at Cairo Jazz Club 610, while Fuzzy and Junior spin some deep and tech house tunes at Cairo Jazz Club.

The final day of this long vacation, Saturday, a night of Arabic classic and contemporary tunes is set to take place at El Sawy Culturewheel, courtesy of Ramy Abul Fotouh and his band, while it’s an acoustic night at The Tap West, where Mariam Ghareeb takes to the stage for a round of covers. Rock and blues are on the menu at The Tap East, where Bluezophrenia take to the stage, and at The Tap Maadi, courtesy of Karkadan. Saturday L’Oriental at Cairo Jazz Club sees Sudanese diva, Asia Madani, taking to the stage to play various folk tunes.

That’s just the tip of the iceberg, check the Cairo 360 Events page for more things to do and places to go this Eid.