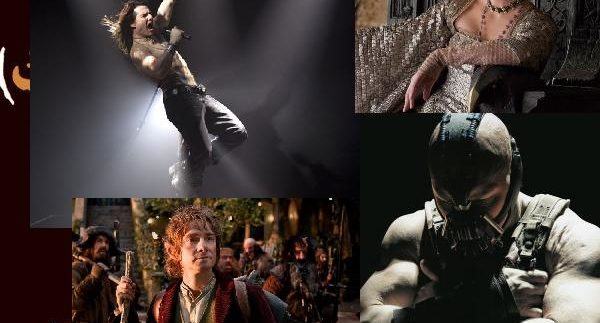 It seems like the number of remakes, sequels, prequels and adaptations are
increasing year after year, with pretty much everything on this list fitting
neatly into one of the aforementioned criteria. That being said, this list has
Cairo 360 swooning with anticipation for the year’s film releases.

If you’ve been living under a rock for the past few years,
you may have missed the massive hoopla surrounding Suzanne Collins’ literary
phenomenon, which has been touted as the next youth-orientated film franchise. It
takes place in a dystopian future and centres on an annual televised event
called the Hunger Games, in which kids are forced to fight to the death. The
first film in the trilogy is due out in March and stars Jennifer Lawrence as
Katniss Everdeen, our bow-wielding protagonist. The film also features, among
others, Elizabeth Banks, Lenny Kravitz and Woody Harrelson. It’s going to be
huge.

The whole Marvel universe collides in this superhero bonanza, which
features Iron Man, Hulk, Thor, Captain America, Black Widow, Nick Fury and
every other Marvel superhero who’s had their own film in the past few years.
Laundry list of superheroes notwithstanding, in this reviewer’s opinion, the
most exciting thing about this film is the director, Joss Whedon, the man
behind TV shows Buffy the Vampire Slayer
and Firefly. If there’s one thing
those two shows tell us about the guy, it’s that he never skimps on smarts, his
dialogue is hilarious and he knows just how to juggle big casts.

This Spider-Man reboot goes back to Peter Parker’s days as a teenager.
This time around, Spidey is The Social
Network’s Andrew Sullivan with Emma Stone as his love interest, and Rhys Ifans as the villainous Lizard. It might look no different to Spider-Man on the surface but this version
looks good largely because of the cast. Either way, it can’t get any worse than
trying to pass off a rhythmically challenged, emo Peter Parker as some kind of
chick magnet.

The third and final instalment of Christopher Nolan’s Batman trilogy
sees Anne Hathaway, and Inception stars
Joseph Gordon-Levitt, Marion Cotillard and Tom Hardy joining the star-studded
cast. Set eight years after The Dark
Knight, the finale sees a retired, disgraced Batman being urged to don his
suit again to deal with a masked menace that the entire police force are
helpless against; Hardy’s Bane. The film has been shrouded in secrecy with
rumours being bandied around right and left feeding the frenzy surrounding the
film. Everything points towards this being the darkest, most epic instalment
yet; the perfect way to end the trilogy that gave us a superhero with some
edge.

For everybody who thought that Snow White was a bit too tame for their
tastes, we now have a far more bloodied version of the children’s classic.
Kristen Stewart stars as the eponymous princess, decked out in armour and swinging
a sword, with what looks like a deliciously wicked turn as the evil queen by
Charlize Theron. Don’t expect any singing dwarves or a ‘someday my prince will
come’ attitude.

Stay far away if you’re allergic to cheese. A film adaptation of the hit
Broadway musical; expect big hair, ridiculous fashion and the cheesiest, most
awesome 80s hair metal. The film focuses on the ‘small town girl’ and ‘city
boy’ from Journey’s monster hit ‘Don’t Stop Believing’ as they fall in love and
try to achieve their dreams on the Sunset Strip. Brought to you by the director
of Hairspray, this one stars Russell Brand, Julianne Hough, Catherine
Zeta Jones, Alec Baldwin and Tom Cruise as a Bon Jovi-esque rock star.

It’s a universally known fact that Casino
Royale was an awesome Bond film and this reviewer is pretty optimistic that
Skyfall will be more like Casino Royale than Quantum of Solace, which was affected by the writer’s strike. This
time around, MI6 is under attack and only Bond can save the organization.
Daniel Craig reprises his role as Bond with Javier Bardem bringing his dark, broody
and Oscar-nominated self along as the villain.

After the slew of vampire films that we’ve been subjected to lately, zombies
should be a nice change of pace. At the very least, there’s no way to make them
all cute and cuddly unlike certain vegetarian, fangless, sparkly vampires who
shall remain nameless. World War Z is
loosely based on Max Brooks’ novel, which consists of little vignettes
spotlighting various humans all over the world and how they react to the zombie
apocalypse. The film stars Brad Pitt as the UN representative connecting all
the people together.

The Hobbit: An Unexpected Journey (December)

After The Return of the King
swept up an amazing eleven Oscars at the 2004 Academy Awards and made a zillion
dollars at the box office, it was pretty much a no-brainer that The Lord Of the Rings’ prequel, The Hobbit, would also be adapted into
not one, but two films. They feature a mix of some of the LOTR actors along
with some new faces and despite the fact that both instalments were shot at the
same time, the first part comes out in December. The Hobbit chronicles Bilbo, Gandalf and the dwarves’ trek across
Middle Earth to thwart the dragon Smaug, who has taken over the Dwarf Kingdom.
Most notably, though; it’s during this trek that Bilbo runs into Gollum and the
One Ring comes into his life.