House of the Dragon: Everything We Loved Pre-Time Skip!

House of the Dragon the Targaryens

This article contains spoilers for House of the Dragon

Last Sunday, the fifth episode of House of the Dragon was released. In case you haven’t heard, the episode marks the end of a certain era. When the next episode picks up, a decade will have passed, which means that many of the main actors will be replaced with older ones, and a lot of new child actors will be added as Rhaenyra becomes a mother and Alicent’s children grow older.

As the halfway point, HOTD’s fifth episode is nothing if not powerful. In its one-hour span, the episode had two murders (Dameon’s wife Rhea, and Laenor’s lover Joffrey), two changes of allegiances (Ser Criston and Alicent Hightower), a royal wedding (Rhaenyra and Laenor), and foreshadowing for an important, future marriage (Laena Valeryon and Daemon) take place.

Alongside all that is going on, there’s also a crucial yet silent declaration of war that gives the episode its title, We Light The Way. Since HOTD is about to take us on a whole new journey, how about we look back at the previous five episodes that make up the first half of the show and reminisce over the things we loved? The Performance of the Young Actors

Four major characters will have different actors starting from next week’s episode: Rhaenyra Targareyan, Alicent Hightower, and Laena and Laenor Valeryon. Of the four, only Milly Alcock and Emily Carey have appeared in all five episodes as they undertook major scenes. Rhaenyra and Alicent are easily the two most important figures in the civil war that has been brewing for five episodes, and the arc of their relationship from childhood friends to stepmother and daughter, then to opposing figures in a civil war is rightly centralised in the show.

It’s fair to say the first half of the show wouldn’t have worked out so well without the younger actresses’ effective portrayal of those characters. They have definitely paved the road to what’s coming and portrayed the change so effectively and so believably with a high level of complexity and nuance, making us unsure of which side we’d root for. 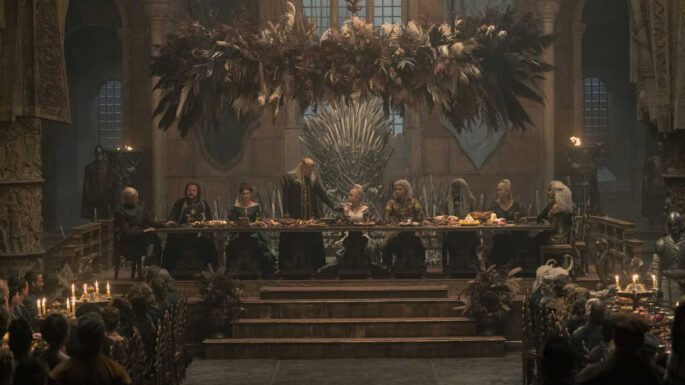 It’s not just the actress’ work that paved the road so well, however. Every aspect of the show so far has been a brilliant set-up for the war to come. The writing and direction most of all. Since the first episode, the show slowly established the most important pieces in the game, Viserys’ flaws as king, the manipulative and ambitious nature of Otto Hightower, and the realm’s deadly desire for a royal son to inherit the throne.

Other elements that show brilliantly established are Rhaenyra’s willingness to fight for her right to rule, Demon’s unpredictable and destructive nature, and the overall tension in Westeros. Every character has been so fleshed-out and so understandable in their motivations, even if those are selfish and greedy ones. In fact, the characters are now so familiar and known to the audience that every action of theirs makes sense. With that said, the overall war is foreseeable by the audience, if not to the characters as well, as inevitable. As the events in the show take place over a period of twenty years, with many important events happening over several years, there were bound to be a few time jumps. Most fans (as well as those of us at Cairo 360) were concerned about how House of the Dragon would handle them.

We’re glad to say that these time jumps were handled so well that they have become one of our favourite aspects. The first-time jump alone showed us how the writing, custom and make-up department, direction, and acting all worked in sync to make it feel natural, giving us enough time to get used to the changes before picking up the pace. The show is neither moving too slowly to suffocate the audience nor too fast to confuse the audience. 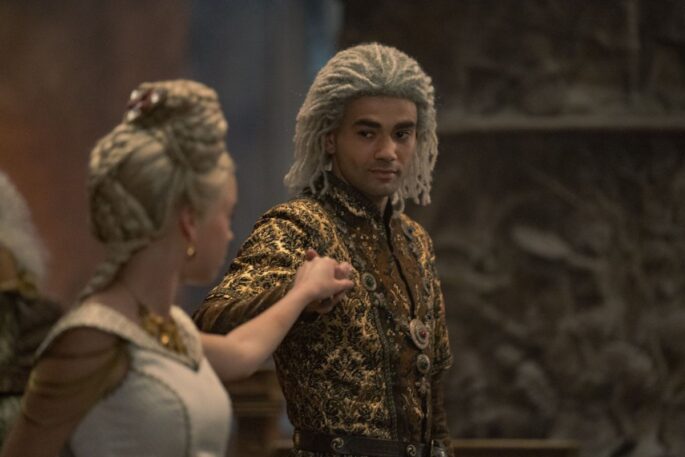 The Characterisation and Gradual Change of Characters

Book readers know what the characters will and where and how they’ll end up. Because Fire and Blood is written as if it’s a historical record from the world of A Song of Ice and Fire, its accounts aren’t first-hand and we’re only accessing the characters through historians.

The show handles this well by removing the elements of natural uncertainty in the book and strongly establishing the personalities, leanings, and nature of the different characters. All characters here, whether likeable or not, are very strongly and distinctly characterised. HOTD definitely brings life to the statement of ‘every villain is a hero in their own story’.

It might not be clear who the true villains are, as most characters are grey and have personal interests. However, that absolutely makes the arc of each and every character believable and intriguing. Even when then those arcs end very differently from how they started, they work because the characters are written clearly and brilliantly.