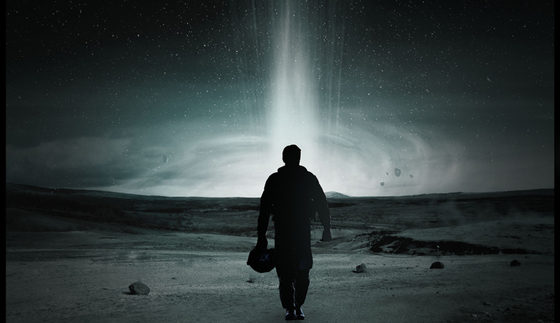 Epic, colossal and mind-boggling wouldn’t even begin to describe Christopher Nolan’s latest outer-space escapade, Interstellar; a gripping sci-fi adventure that holds the power to stir, dazzle and astound the minds of many who will venture out to see this larger-than-life cosmic sonata unfold on the big screen.

Set in the not-so-distant future, Interstellar focuses on a place in time which finds Earth pillaged by an environmental disease known as the Blight; an unforgiving disorder which has caused a major decrease in the humanity’s food supply as well as the abandonment of technology and discovery, for the sake of basic survival needs.

In the midst of it all is a former NASA test pilot, Cooper (McConaughey); a widowed father of two who has been forced to give up his days of flying and is now busy trying to make peace with his life as a corn farmer, whilst also tending to the needs of his teenage son, Tom (Chalamet), and his ten-year old daughter, Murph (Foy). After coming across a peculiar displacement of gravity in Murph’s bedroom, Cooper soon ends up at the doorstep of the NASA secret compound headquarters where he is introduced to a secret outer-space mission, led by Professor Brand (Caine) and his scientist-astronaut daughter, Amelia (Hathaway).

The assignment requires Cooper to travel through a newly-discovered wormhole – located near Saturn – and locate a habitable planet for the human race to inhabit.  Intrigued, but equally devastated at the prospect of leaving his loved ones behind, Cooper soon sets out on the uncertain mission that will lead him to discover something so much more than he – and everyone else on his team– initially bargained for.

Written and directed by Nolan himself, Interstellar is definitely unlike anything you’ve seen before and most certainly his most ambitious films to date. Thought-provoking is a rather loosely used terms when it comes to Hollywood, but not in the case of Interstellar, thanks the intricacy and complexity of the ideas and scientific ideology presented in the storyline. Lending extensive focus on the laws of gravity and time relativity, the story might leave you a little boggled but equally impressed, regardless.

Visually speaking, Interstellar is truly something to behold; the decision to shoot much of the movie with  IMAX 70 mm film photography has really given a whole other meaning to the heavily-exposed presence of CGI, which strangely, gives the entire outer-space a relatively believable and authentic feel.

Continuing to ride on a wave of success, the Oscar-winning  McConaughey once again proves just how much of a versatile and talented actor he really is.  Staying relatively grounded and composed throughout the minutes – which just so happen to account to a total of 169 – McConaughey led the way confidently, though the rest of cast don’t resonate all that well.

Nolan has cited sci-fi epics such as Metropolis, 2001: A Space Odyssey and Blade Runner as influences and the British director more than hits his lofty ambitions; Interstellar is a big movie with a big message and even if you don’t really fully grasp its ideas, it will leave you in awe.

Given the movie is 169 minutes long and costs approx. $165 million to make, it therefore carries a price tag of approx. $976,000 per minute. Talk about pricey!