This year, one of the most ambitious movies to come out of the Middle East in some time is being filmed – right here in Cairo. Noor Hilal Arnaoot’s Marriage Impossible is pooling together some Egypt’s most established actors with counterparts from the US in what is already a highly-anticipated film that looks at the thorny issue of inter-culture and inter-religion relationships in the Arab world.

Speaking to Cairo 360, the award-winning Kuwaiti-born and based Syrian director is excited at the transition from short film to feature film, but isn’t kidding herself about the task at hand. “For me, it’s a whole different industry.”

Having made her name with Never, Never Talk to Strangers and Dancing in Fumes, Arnaoot knows that the move to the world of feature films comes with a whole new set of challenges.

“With features, it’s all about catering to the audience. I have a promise to fulfil. They’re coming in, paying for tickets, sitting there for two hours – I have to entertain them. It’s a whole different mindset – there’s so much more to think about. You start to think about the financial aspect – there’s a budget, a return, etc.” 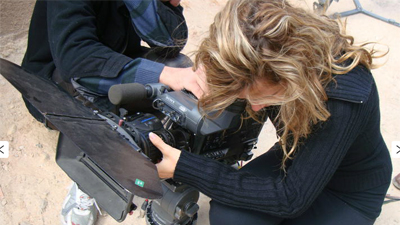 But this hasn’t in anyway dampened her spirit or made her hesitant. “It’s not a negative, it’s a challenge. I’m extremely excited and I’ve been working on this script for so long. I have so much more space to explore and talk about things.”

The subject matter in Marriage Impossible isn’t necessarily an alien one to Egypt, where political and social instability In the last four years has only gone on to highlight and widen disparities within the population.

“I’ve seen it happen a lot; it’s not ok to marry or date this person or that person because they’re from different countries/religions.” But the defiant filmmaker has no qualms about handling what is an endlessly complex human topic.

“I want to show how hard and challenging this is in our culture. I have one life; I should be able to choose who to be with.”

For Arnaoot, though, out of such an intricate issue comes a very simple wish. “Hopefully the film can change what people think of marriage and love and that it shouldn’t be based on religion.”

The overall approach to the project, from script to screen, has been one that aims to jump headfirst into the subject rather than just use it as a backdrop. “The best way to describe it is a very real movie – I want audiences to think that these are real people that they connect with.”

One of the biggest questions to arise is her choice of setting; in short, why Egypt?

“Egypt has a huge film market and a fascinating culture – I wouldn’t mind living here, actually.”

Pointing to Egypt’s infamous humour, Arnaoot’s visit to Om El Donia for a friend’s wedding sparked something inside her – even the country’s endless contradictions.

“Something connected to me – double standards are interesting.”

But the last decade hasn’t seen Egypt’s film industry at its best; slapstick comedies and dramas that borrow heavily and shamelessly from Hollywood dominate cinema screens and box office sales – something that makes her choice even more peculiar.

“There’s more potential than what’s being produced; the actors and crews are great, but producers have formula for financial success. Blue Elephant impressed me visually and production-wise; hopefully this could be a change in the industry.”

As an Arab woman, Arnaoot has and is defying the odds in fulfilling her ambition – even if she does modestly shrug off the notion. She’s coy about revealing details, but everything points to Marriage Impossible being a milestone in modern Arab filmmaking, with it set to be released both here and the US. Asked what kind of advice she would give to other filmmakers in the region, she’s quick to respond.

“Use what we have. Use how messed up we are as Arabs. Stop trying to do what’s right and do something natural, meaningful and different.”

Stay tuned to Cairo 360 for exclusive coverage of Marriage Impossible.