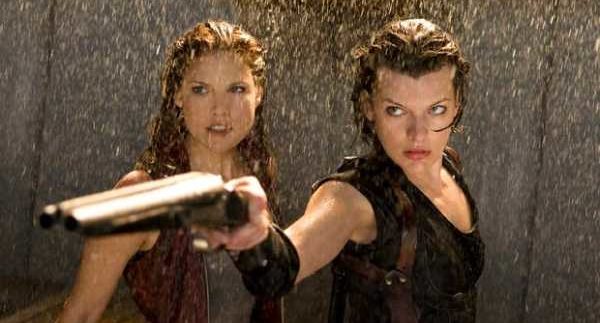 It
looks like 2010 is the year of 3D Blockbusters. With many of these films coming
to Cairo cinemas soon, we can thank Avatar
for popularizing this new era of cinema. Films that were shot using regular cameras can go through a 3D
conversion (for a mere US$10million) and that’s how we got dismal affairs like Clash Of the Titans, where the end
result looked more like paper cutouts than actual 3D. While Titans misfired, the recently released Toy
Story 3 was a pleasant 3D surprise. Here are the top 3D releases for
the coming months. Just bring your 3D glasses and head to the closest Cairo
cinema.

The Last Airbender (July 2010): Based on the Nickelodeon animation Avatar: The Last Airbender (No, not that
Avatar), The Last Airbender is director M. Night Shyamalan’s latest foray into
family films. The description reads like Star
Wars set in the North Pole with martial arts taking the place of light
sabers. The 3D technology used in the film is called 3D conversion, which means
the film was shot in regular 2D and then converted. So far, this technique has
given us dismal affairs like Clash Of the
Titans with the end result looking more like paper cut-outs than actual 3D.

Legend Of The Guardians-The Owls of Ga Hoole (September 2010): Zack Snyder, the director behind Watchmen and 300, may not
be the most perceptive director out there, but he has visual flair and an eye
for action. Based on a successful children fantasy book Guardians of Ga’Hoole, the film is a summation of the first three
books of the series. In short; it’s about good owls versus an army of bad owls.


Resident Evil: Afterlife (September 2010): This is yet another instalment in the Resident Evil series that has managed to
steadily provide mild, brain-dead entertainment for action and horror fans.
Picking up where the last instalment ended, Milla Jovovich reprises her role as
Alice and finally gets to face her arch-nemesis, Albert Wesker. The film was
shot using James Cameron’s Fusion Camera System, the same system that was used
in Avatar, so at least you’ll be
getting your money’s worth in 3D.

Step Up 3D (October 2010): The third instalment in the Step Up series (it’s a great time for sequels to capitalise on the
3D craze), was shot in actual 3D. Get ready to get your
so-you-think-you-can-dance fix in three-dimensional glory. The film was shot in
Paris and New
York.

Piranha 3D (October 2010): A horror film from Splat
Pack director Alexandre Aja, Piranha
3D is about flesh-eating fish that attack college students during a spring
break in Lake Victoria. Aja’s films are known
for their deservedly R-rated brutality. All you need to know is that an entire
canal was dyed red for the shooting.

MegaMind (November
2010): DreamWorks Animation’s second release of the year
after the astute How to Train your Dragon,
MegaMind is perhaps lighter on the concept
but heavier on the star-driven talent behind it. You’ve got Will Ferrell, Brad
Pitt, Jonah Hill and Tina Fey all lending their voices to this tale of super villains.


Tangled (November
2010): Tangled has some of the most lush imagery ever produced in
animation before, let alone 3D animation. The film’s visual look is based on
French Rococo artist Jean-Honoré Fragonard’s painting The Swing,  giving the film a
hand-drawn, traditional look. Based on the German fairytale of Rapunzel, about a princess
locked in a tower and the guy who saves her, this will be the 50th feature in
the Walt Disney Animated Classics series.

Harry Potter and the Deathly Hallows (November
2010):This will be the last time Harry will get to use his
magical wand against the tyranny of Voldemort,and hopefully he’ll make it count–
well, that’s half-true since the Deathly
Hallows has been split into two films. This is one of the few films that
lacked the foresight to use 3D cameras when shooting. 3D conversion treatment was
applied, only the producers promised to give extra care and attention to
detail, and since they have enough time, we’re sure the results won’t be as
utterly fake as on Titans.

The Chronicles of Narnia: The Voyage Of The Dawn Trader (December 2010): The third of the Narnia
Chronicles with an added third dimension, Disney pulled out when the sequel
didn’t fare well at the box office, but producers still hope that fans of the
iconic children’s classic books will return for the latest instalment.

Tron: Legacy (December 2010): The long-awaited sequel to 1982’s cult classic Tron, Tron: Legacy is perhaps the
most anticipated 3D film of 2010 and one of most expensive with a budget
reportedly close to the 300-million mark. Jeff Bridges returns to reprises his
role as Kevin Flynn. His son gets pulled into the cyber universe that his
father got lost in. Although little is divulged about the story, the visually
stunning images from the trailer is reason enough to get amped about this 2010 Christmas
release.

Gulliver’s Travels (December 2010): ‘Black is the new Big’ is the tag line for this new
take on Gulliver’s Travels starring Jack Black. It’s a comedic update on the
classic tale with a contemporary setting. Despite the film being shot on
regular film and then converted to 3D, director Rob Letterman may be able to
pull it off; considering he started his career in 3D animation. Joining the
funny man on screen is Emily Blunt and How
I Met Your Mother’s Jason Segel.