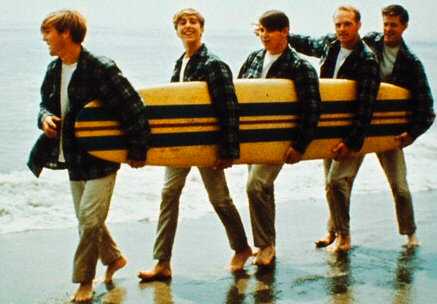 Summer is officially
here in Cairo; where you step out onto the
scorching pavement of Cairo’s streets and automatically
pine for the North
Coast or one of Nuweiba’s
wonderful beaches.

Whether you’re
stuck in the office, a sweltering taxi, or relaxing by the pool (where we all
should be), a little music can always help calm your heated nerves. Here’s a
list of Cairo
360’s summertime favourites to get you in the mood.

1.‘Inaudible Melodies’ by Jack Johnson: Jack Johnson’s 2001 debut with album Brushfire Fairytales hit the
acoustic rock scene by storm, earning the album a double-platinum spot on the
charts. This song’s go-with-the-flow attitude and clever lyrics remind us that
we need to slow down, soak in life, and use our freedom to simply think.

2.‘Good Vibrations’ by The Beach Boys: This
1966 psychedelic pop song was, and still is one of the Beach Boys’ all-time
greatest hits. The use of unique instruments such as a cello and an electro-Theremin
gave a unique sound to the song; earning it number six spot on Rolling
Stone’s 500 Greatest Songs of All Times… take it to the beach!

3. ‘School’s Out’ by Alice Cooper: It’s in the drum roll and heavy guitar lines of the chorus. Whether you’re
fresh out of school for the summer or you graduated ions ago; this track brings
out the rebel in everyone, inducing a head-banging affair. Vincent Damon
Furnier, aka Alice Cooper, hit it home with this 1972 hard rock classic.

4. ‘Alright’ by Supergrass: Featured on the Clueless soundtrack, this Brit-pop tune hit the surface
in 1995, pretty much defining the mood of that time. From the melodic piano
beats to the song’s cheery lyrics, its summery vibe sends you into an automatic
feel good state. Oh, the joy of youth.

5. ‘Sunny
Afternoon’ by the Kinks: Written by songwriter Ray Davies and released as a single in 1966, the song
took the Kinks in a different direction from their usual power-chord rock hits.
The mellow tone and the track’s lyrics embody the lovely magic and beauty that
the sunshine provides.

6. ‘Sign’ by Ace of Base: The funky synthesizer and poppy tone of this 1993 Swedish dance-pop hit took us
back to the glory (or horrible) days of… High School! While Ace of Base’s
dance moves in the music video were far from impressive, we remember topping
them by far. Take a moment and breathe in nostalgia!

7. ‘Keep the Record on Play’ by Outlandish: For good measure, this track not only features a little Arabic in their lyrics
but with two of their Denmark-based band members hailing from the Middle East,
they like to represent. Taken from their 2009 album, the track reminds you that
music is a remedy; so soak it in and groove to the uplifting beats.

8. ‘Summertime’ performed by Ella Fitzgerald and Louis Armstrong: Originally written by George and Ira Gershwin for the 1935 opera Porgy and
Bess, Ella Fitzgerald’s 1960 recording has turned this track into a must on
anyone’s summertime playlist. From Fitzgerald’s soulful voice to the jazzy
atmosphere that this song expels, you may find yourself lost in a daydream.

9. ‘Who’s got the Hooch’ by Sublime: This 1993 song left everyone asking ’What exactly is hooch?’ While it’s
still up for debate seventeen years later, the track remains catchy and funky;
making you want a little hooch, whatever it may be. Sublime’s use of a
seriously talented saxophonist pushes this song that much further into chill
mode.

10. ‘Mellow Mood’ by Bob Marley: A summertime playlist couldn’t be complete without a little shout-out to our
favourite Rastafarian. Written and recorded in 1973, Bob Marley and the Wailers
took this mellow, calming classic to another level; giving us all a taste of
what the majority of their music was about. Like the lyrics say, ’Love, sweet
love, darlin’.’