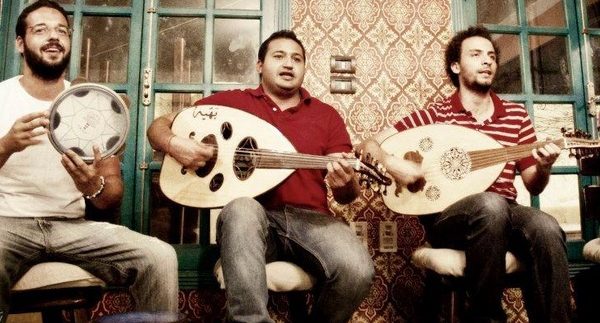 Revolutions are known to bring about great artistic movements; as a country rids itself of worn out values and misused power, ideas and expression begin to take on different shapes and forms. Art as a product of a revolution tends to hold certain ideas close regardless of where they take place in the world; social well-being is often a prominent subject within this particular medium, as is the desire to revive your culture and nurture it back to a position of solidarity and strength.

Coming together soon after the revolution, members of Baheya turned to their heritage for inspiration and guidance. A musical icon for many struggling Egyptians, as well as Arabs, Sheikh Imam along with Ahmed Fouad Negm, or Fagoumy, served as the backdrop to the music they would come to produce.

Growing up blind, Sheikh Imam enrolled in classes to memorise and recite the Quran. Having a natural sense of rebellion, he opposed a law that forbid religion students to listen to the radio, leading to his expulsion. With a soothing voice, he eventually transitioned into a musical career. At the age of 44 he met poet Ahmed Fouad Negm and together they composed and played songs that were highly political and discussed the social hardships of the poor and the working class.
A listen to their humble recordings offers insight into the hard life both men endured. Their recordings often had children’s noises and background mumblings; since their music was banned from the radio, Imam and Negm would play and sing while audiences recorded it on basic cassette tapes, which were then copied and smuggled across the Arab world. Negm once wrote a piece called ‘Mamnou’at’ – literally translating to ‘the forbidden’ – which listed everything that was banned at the time: ‘banned from travelling, from singing, from talking, from smiling, but every day I fall more in love with you [the nation]’.

Until quite recently, listening to Imam’s music in public would have been considered illegal. Although their music was purely nationalistic, the government viewed it as going against the state’s interest, nonetheless band members of Baheya have not forgotten the legacy Imam left behind.

The band claim that “since there has not been much reform the same struggles still exist.” Listening to some of the songs which were composed long ago, one cannot help but notice distinct similarities in the struggles that activists faced then and the ones they face now. A lot of Imam and Negm’s songs were written and composed during prison sentences due to their political affiliations. Flash forward generations and generations later, during the November 2011 ministry sit-in, Baheya took their first critical steps towards making music.
Omar El Ayat (vocalist of the band) had brought his oud during the sit-in knowing there is always time to kill and his inspiring Sheikh Imam music had been a success with the crowds in the past. Coincidently, just across from him and playing the same genre, was Abd El Ghany Sayed. It didn’t take long for them to team up and invite friends of Sayed, Omar Sami and Omar Khater, a drummer and a backup vocalist respectively, to join them in their pursuit of pushing musical boundaries.
Although ultimately amateur, they were able to put together a functioning band. It was when famous poet Zain El Abdeen Foad heard them play during the ministry sit-in that he suggested they perform in front of a bigger crowd of 6000 people at El Fan Midan; a perennial live music event. This event marked the start of a musically prosperous future.
When asked if they would stop playing music if criticised under the Brotherhood rule, they laughed, responding that “if Sheikh Imam could do it we don’t see why we couldn’t.” They do, however, think that it’s easier for the government to manipulate nowadays, since they reach out using a sensitive topic such as religion. “While before people disregarded the government’s ban of art, it would be more difficult now whilst in a religious framework” says drummer Omar Khater. Vocalist Omar Ayat states that the biggest difficulty they face is the lack of awareness towards folkloric music. He goes on to argue though that if three people out of one hundreds are enjoying it, then so will the band.

When asked what their future dreams are, Omar Khater laughs, “gaining a wider selection of groupies.” They one day hope to record an original; Ahmed Foad Negm himself has listened to their material, giving them appraisal.

Even though many bands that offer traditional music have emerged after the revolution, Baheya captures soul and is most true to the legacy that Imam has left. Their main aim is not to earn money but to help flourish political thought and freedom of speech.