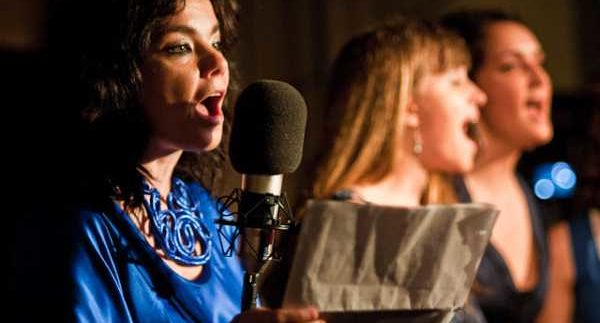 When one thinks
of Icelandic-based Björk, one of two things usually comes to mind: crazy bird
costumes or the song titled ‘Oh so Quiet,’ which is mainly composed of a series of whispers and screams. From her falsetto vocal tendencies to diverse musical genre,
she’s managed to make a name for herself as a unique and avant-garde artist.

Björk’s latest
musical experiment, Mount Wittenberg Orca, is collaboration with
experimental/indie rock band The Dirty Projectors, which was released on July 7th in the form of an EP. Hailing from Brooklyn,
the Dirty Projectors have also teamed up with musical masterminds such as the
Roots and David Byrne. With this history behind them, adding Björk to the line-up
of collaborators is yet another success in shedding major light onto a rather lesser
known band.

Overtly strange
and offsetting at times, you can’t help but wonder what mind-altering
substances were involved in both the production and making of this musical
conception. Thank God it’s just an EP, because more than seven songs of this
nature could quite possibly send anyone into an earful of sensory overload and
warped psyche. And what would the videos be like?

Seemingly caught
up in constructed worlds, bouncing between fairy pleasantries in a trippy
forest to mermaids living in a roaring sea, the album will take your
imagination on a definite spin.With the opening track ‘Ocean’, the annoyance
of the Dirty Projector’s vocals and heavy amount of reverb are slightly offset
by Björk’s light and dreamy voice; which is a little easier on the ear. If you
share similar feelings about this track, don’t listen to ‘Sharing Orb’.

‘All We Are’ closes
out the album with a solemn sounding track, composed of ‘oohs’ and ‘ahhs’,
wafting through the air with an off-mixture of polymorphic sounds and synthesiser
beats.

While this
collaboration probably had a deep conceptual reasoning behind the album; for
this reviewer, it left a sense of frustration: we wanted to enjoy it but were not
quite able to.