Big Mac Gets a Proper 50th Year Celebration and We’re Lovin’ It!

There’s not much higher to go for international franchises who have been around for decades, and are commonly known in practically every city in the world.This is especially true when it comes to McDonald’s. But in celebration of 50 years since the inception of the delicious Big Mac, the international franchise is unveiling a limited edition collectible MacCoin with the aim of becoming the first fully food-backed global currency.

The limited-edition currency is set to be available starting the second of August, and are to be collected or shared, so you could finally redeem them for a free Big Mac. There are five collectible designs celebrating the five decades of the Big Mac. So how can you get your hands on these tasty MacCoins? McDonald’s has decided to make this currency available in 50 countries worldwide. In each country, there will be exciting events celebrating the arrival of the MacCoin, each event special to the country itself. 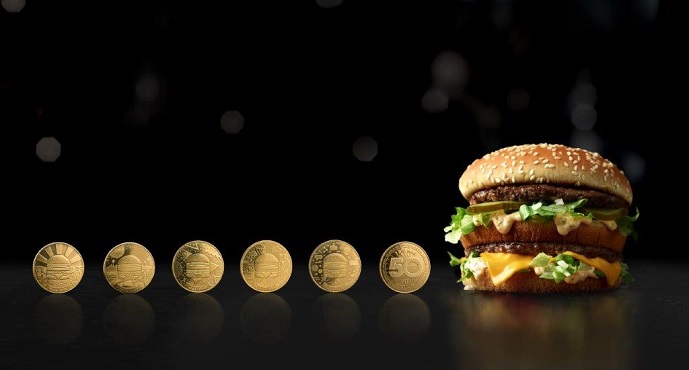 Big Mac Fans already know this, but the Big Mac fame worldwide is undoubtable through many factors. Putting aside the combination McDonald’s special sauce, unique tasting pickles, formidable sesame seed buns, and all-beef patties, the Big Mac has become an icon of what delicious burgers should look and taste like. Its fame has even been used in economics. When The Economist attempted to create a comparison in the purchasing power of different international currencies, they created what’s called the Big Mac Index, which is essentially how much a Big Mac burger costs in different countries as a measure of the standards of living. This was one of the biggest drives that inspired McDonald’s creation of the MacCoin currency.

This August, you get to participate in global interactive activations to collect MacCoins, share them with your friends, or redeem them for a Big Mac. You can also keep them as souvenirs, after having a few tasty Big Macs, of course.

McDonald’s always aims to up its game and remain an international icon when it comes to delicious fast-food. Their global awareness keeps growing with its simple slogan, “I’m lovin’ it” plastered over their recycled bags in a multitude of languages. So stay tuned this August for the upcoming activations and special events to earn MacCoins, so you can have some fun, and eat some tasty burgers.

*Disclaimer: MacCoin has no cash value and is only redeemable for one free Big Mac at participating McDonald’s restaurants through 2018.