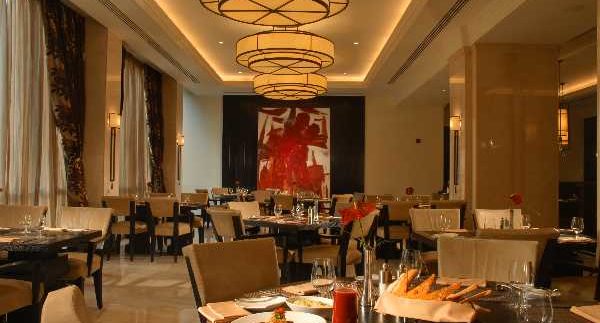 One of the major challenges that we
face in Cairo during Ramadan is planning successful fetar outings. With almost
the entire city sitting down to breakfast at the same time, there is
considerable strain on restaurants, which often results in inadequate service
and subpar food. If you are looking for a sophisticated and grand fetar outing,
Cairo 360 presents you with the best five-star hotels to choose from.

Your hotel options range from the Fairmont
Nile City to the Cairo Marriot, where sohour may be a better option
in the oriental-themed garden, or try Sofitel Gezirah’s special Ramadan
tent menu. The Grand Hyatt and the Four Seasons Nile Plaza both
promise laid-back and luxurious atmospheres.

The palatial Cairo Marriott Hotel
in Zamalek is taking reservations for fetar at Omar’s Café,
where you can enjoy an open buffet fetar for 250LE. For
sohour, the hotel’s fourth-floor rooftop terrace at the Almaz Cinema offers
dining à-la-carte or from the oriental buffet. The Cairo Marriott is home to other
sohour favourites, such as the
Garden Promenade Café and Egyptian Nights lounge; where a minimum
charge of 100LE applies for sohour, which continues till 3AM.

If you wish to break your fast with
a menu of haut fusion cuisine, the Fairmont Nile Towers hotel hosts Bab
El Nil,
an elaborate Ramadan tent featuring an open buffet of oriental dishes, live
traditional music and a scenic open-air setting. The buffet features flavours
from restaurants Saigon Bleu and
Napa Grill,
with a few Egyptian items added in the spirit of Ramadan. The buffet costs
188LE, and is held from sunset until 9PM. Afterwards, a set
sohour menu offers an assortment of mezzas and main courses of either mixed
grill or foul and falafel at a set price of 145LE per person.

The Grand Hyatt offers a
range of Ramadan-ready menus at many of its restaurants. Fetar is served
à-la-carte at Fontana
(155LE per persons for its European and Middle Eastern menu), Al Sakya (175LE
per person, with a menu of Indian, Italian and seafood options) and Nubian Village
(200LE per person to enjoy Egyptian- and Lebanese-influenced cuisine in an
ethnic Nubian setting). Sohour is offered from 8PM to 3AM in a hotel café, with
oriental menu options and shisha available, with a 125LE-minimum charge per
person. The hotel also rents out a Nile-view banquet space for groups of 100
plus. For reservations, call 0223651234 or 022366473.

The newly opened Kempinski Nile
Hotel offers a set fetar menu at its Turkish restaurant Osmanly
for 195LE, which includes hot and cold mezzas, soups and main courses that
change every day. You can order fetar and sohour a la carte at the no-menu
restaurant Blue.

The Four Seasons Nile
Plaza will host open buffet menus at restaurants Zitouni
(known for excellent breads and delicate Lebanese fare) Aqua (server of sushi and
seafood) and Steaks (which combines
imported fillets and teriyaki assortments). The buffets cost a generous 290LE,
and reservations require a 50% deposit upon booking; so contact the
reservations desk at 27917000. The open-air Pool Grill also
serves fetar à-la-carte for 250LE.

Across the Nile, the Four Seasons
First Residence’s Italian restaurant Seasons will serve fetar with an
open buffet of oriental and international dishes, complete with pastas, grills,
and mezza, for 270LE. After 9PM, the restaurant returns to its usual a la carte
menu. Call 0235671600 for reservations.

Aura, also in the First Residence, offers a Lebanese-infused
fetar with four set menu choices at 260LE per person. After 8PM, sohour will be
served in an open buffet, with a grill station and mezzas. The sohour buffet
costs 220LE and features an oriental jazz band from 10PM to 2AM.

Sofitel Gezirah hosts a lively Ramadan tent this year at its floating
restaurant, Le Deck.
For further details or to reserve, call 0174443349 or visit www.tazkarty.net. The open
buffet draws on menus from the hotel’s various restaurants. Fetar comes with a
290LE-charge, and a chance to relax by the Nile and take in live
entertainment. Sohour is served for a slightly lower 160LE-minimum charge and
features an oriental menu, while merely stopping by for a shisha will cost
100LE. The venue promises some excellent shows and cuisine to make the evening
worthwhile.

Khan El Khalili
Restaurant at the Mena House Oberoi will
host fetar in its garden for 230LE (125LE for children under ten) until 9PM.
There is no special sohour menu, but the restaurant stays open 24 hours a day.

The Fairmont Heliopolis and
Towers’ restaurant Al Dabké will offer a set fetar menu for 259LE, while My Kind of Place
will host an open buffet fetar, also for 259LE. The hotel’s Meshmesheya Tent
will host sohour that ranges from 181LE to 329LE depending on the grilled meats
included in the menu. The tent will feature performances by several major
singers, so expect the prices to soar. For example, sohour and a performance by Ramy
Ayash will cost 671LE.

JW Marriott
Cairo in Mirage City offers an open buffet
in its beach area for 245LE. Sohour will be served at a set menu price of 170LE
until 2:30AM.

Dusit Thani Hotel will serve an open buffet fetar at their Branzino restaurant for
115LE from 7PM to 9PM. Sohour is served outdoors from 2AM to 4AM.

Bear in mind that booking ahead is necessary,
especially if you’re planning a weekend fetar for a large group. Some hotels
require down payments and reservations weeks ahead, especially if a famous
singer is set to perform during sohour, so plan accordingly. Also, please note
that some prices listed above are not all-inclusive, so plan for service and
tax charges.