iPhone vs. BlackBerry: A Battle of the Gadgets 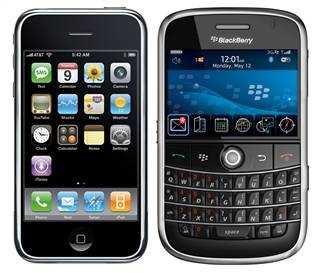 For many professionals and tech junkies, Cairo is a battleground where smartphone owners duke it out for popularity. These days, it seems that the almighty BlackBerry is emerging the victor. Stop by any Mobile Shop, and chances are the BlackBerrys are pushed to the front of the display case.
While not long ago Cairo was true iPhone terrain, a range of sleek BBs have hit the market and caused a stir. We’re no longer content to simply swap phone numbers, ogle sleek games and apps, or add friends on facebook–now it’s all about THE PIN.

This means Sony Ericsson, Nokia, LG and now Apple have suffered casualties and are nursing their wounds, presumably scheming their smartphone market takeovers.

For those in the market, iPhones are available on contract which makes purchasing a phone as easy as visiting your local Mobinil, Vodafone or Etisalat branch and shelling out the cash for your desired model.
Despite this convenience, most iPhone’s in Egypt have been purchased abroad, unlocked and put into use here since they take longer to be released in Egypt and are sold at a higher cost.
Due to inflated prices, an iPhone purchased on contract costs about 5000LE, while in places like the GCC they are as low as 4000LE, saving you a bit. Tradeline, Apple’s official retailer partnered up with Vodafone in Egypt, makes it that much easier (although expensive) to buy a phone, take it in for repairs or get all the accessories you desire—if you prefer to buy in Egypt and don’t risk all the complications of an unlocked phone from abroad, that is.

Starting at 2000LE to upwards of 6000LE, BlackBerry phones are available from all major providers, and the monthly BlackBerry service costs about 100LE. It looks like Cairenes of all walks of life have become infected; the BlackBerry is no longer reserved for Wall Street execs or harried personal assistants to the stars, but is now for anyone willing to make the investment. While not available in stores or by most mobile providers, BB accessory sales have taken to open waters, so to speak: that of the online boutique.
Now, nearly any case cover or Bluetooth gadget can be bought via facebook groups at prices that compete with most retailers in the country.

Social gatherings, nights on the town and even intimate dinners are no longer immune to the now epidemic BlackBerry etiquette. Whether on silent, beeping or vibrating, that little red message light always seems to be flashing away.

There are a few features that give BlackBerry a competitive advantage: BlackBerry Messenger (BBM) makes communication that much more convenient; best of all, it keeps you up-to-date with your international contacts at no extra charge.  The service eliminates the need for those pointless “I’m five minutes away” calls or texts and adds a whole new level of stealth to chitchatting in class or at the office.

The iPhone may be sleeker with more cutting edge applications, sexy Apple graphics and a larger screen to access the internet, but Blackberry’s free instant messaging service is trumping the phone’s superior design.

IPhone users are becoming few and far between, and today that means that without a BlackBerry you miss out on a not-so-secret society of communication. Many will ask; is that such a bad thing? If you’re a joiner, then by all means get initiated to the BB circle; but privacy lovers be warned!

The new iPhone model is due to hit the market this June, and it remains to be seen whether it will be a contender in the smartphone battle or if it will drop to the wayside with Nokia and Sony Ericsson, appealing only to the die-hard users.

While many of us have caved to the BBM madness; have faith that there are enough iPhone loyalists in Cairo to prevent a total BlackBerry monopoly. In fact, we might be able to hope for a truce: the latest bit of news to generate some BB-buzz is the application that enables BlackBerry and iPhone users to chat for free.
Maybe the two can be friends, after all.