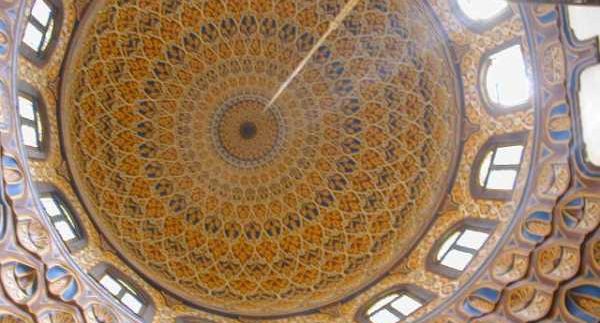 When the sun sets
on Cairo and
the hazy sky fills the air, you may not be able to see the stars, but one thing
you do see are hundreds of minarets gracing the skyline.

Seeing as how one
of Cairo’s many
nicknames is ’the city of a thousand
minarets‘, one cannot help gazing at the view without wondering where it all
started.

As the largest
Islamic institution in the world and the most famous mosque in the Islamic
world, Al Azhar Mosque is known worldwide by religious scholars and non
scholars alike. While its construction began in 970AD, under the commission of
Fatimid general Jawhar El Seqilli, it was completed and finally established in
972AD. In dedication to Fatima Al Zahraa, daughter of the Prophet Mohamed, it
was originally a meeting place for students of Islamic studies.

In 975AD, the
first lecture was given, initiating the foundation of the second oldest running
university in the world, Al Azhar University. Presently, the university is not
only the most prestigious location for Islamic studies worldwide, but has
become the main centre for the study of Sunni theology and Sharia’ law.

Located in El
Hussein square in Islamic Cairo, the mosque is set in the centre of several
Islamic monuments and nearby mosques. The grandeur of its size and architecture
is quite difficult to miss. While the building has been architecturally
remodelled and added on to over the years, parts of the original structure are
still intact. Five ancient minarets grace its construction with various
cascading columns and balconies interloping on the building’s sides. The mosque boasts five entrances, and the main entrance to the mosque, also
known as the barber’s gate, was originally named after the area where students
would have a shave before entering.

Once inside the
mosque, the courtyard is fascinating not only because of its size (spanning
around 84 by 34 m), but because it is completely surrounded by beautifully designed
porticos and supported by over 300 marble columns that stem from its original foundation.

The main prayer
hall of the mosque is to the east; containing row after row of intricately designed
Kufic inscriptions on the interior walls. Detailed stucco decorations and
geometrically shaped patterns and panelling are carved into inlets and corner
coves, a credit to the restoration commissioned by various leaders including
Sultan Baybars the First.

In 1340, a
library was added adjacent to the courtyard and in 1753; another hall was constructed
to hold the tomb of Jawhar El Seqilli, in dedication to the general.

While the
majority of the architecture stems from a hypostyle design, the flat ceiling
and columns found throughout the entire grounds are reminiscent of the ancient
past, which can be felt through the intricacies of the detail and devise.

Although planned
tours of Al Azhar are not offered, visitors are welcome to stroll around and
contemplate its history, architecture, and present day atmosphere. Scarves and
shoe booties are not provided so if you’re going for a look, make sure to dress
in appropriate clothing: as with all mosques, women are asked to veil their
heads and wear long, loose clothing, while men are asked to wear long trousers.
Take off your shoes when entering the mosque, and carry them with you in your
bag. When entering a prayer area, keep your voices down and do not walk in
front of a praying individual out of respect for the mosque.