Ben Ezra Synagogue: A Different Side of Old Cairo 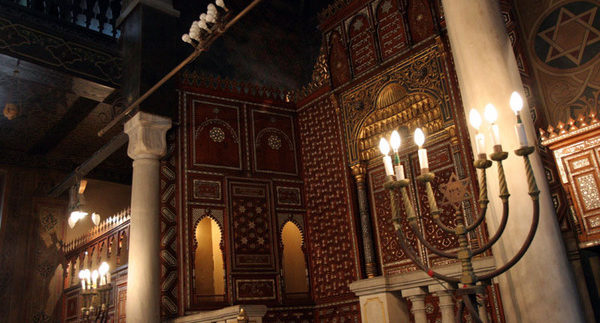 How did a
community of over 75,000 Jews vanish from Egypt? After the founding of Israel
in 1948 the situation for Jews in the region became impossible and Jews in
Egypt were to be forever declared Zionists and enemies of the state as a result
of the Suez crisis in 1956. The Jews’ assets were confiscated and they were expelled,
while it is believed that around 25,000 left voluntarily. Others were held in
prisons such as Abu Zaabal and Tora for a period of up to three years on
account of the 1967 war. All of these events led to the eventual and absolute disappearance
of a community rich in culture and heritage.

Ben Ezra is
quite easily accessible from anywhere in Cairo, with the Metro being the most
convenient. From the Marc Girgis station, take a left and you’ll find an
underground tunnel that leads to a number of heritage sites including Ben Ezra.
The synagogue may appear to be quite ordinary but the history behind it is on
the contrary, quite extraordinary.

Ben Ezra is
often referred to as the El-Geniza Synagogue; Geniza being Hebrew for ‘storage
room’ and in the 19th century, sacred Hebrew manuscripts were found
stored there. The collection, widely known as the ’Cairo Geniza‘, gave
significant insight into how the Jewish community dealt with past Islamic
leaders, as well as several interpretations of the Torah. The manuscripts were
eventually shipped to Cambridge, England where scholars from around the world seek
them.

Located
directly behind the hanging church, Ben Ezra Synagogue was originally a church
built in the 8th century, named El Shamieen Church. Local legend says
that the shores delivered Moses to the exact place where the Ben Ezra Synagogue
stands today. Adding to the historical significance of the sight, legend also
has it that a copy of the Old Testament written by Ezra the Prophet (Al Azir)
himself is located inside this mystical place.

In order to pay
annual taxes to the Muslim rulers of Egypt in 882 AD, the Copts were forced to
sell the church to the Jews. Abraham Ben Ezra paid 20,000 dinars for the structure
during the reign of Ahmed Ibn Tulun. The synagogue has been through much renovation
and restoration over the years; the current building dates back to 1892 and is
a faithful reconstruction of the building that had previously collapsed. It was
during this most recent reconstruction the famous ‘Cairo Geniza’ manuscripts
were discovered.

A Basilica
design, the building has a distinct rectangular shape and is made up of two
floors: the first is designated to men while the second to women. The first
floor is divided into three main parts, most important of which is an octagonal
centre with the Bima – a stage for Torah recitation.

The detailing
of star, octagon and rectangular shapes around the synagogue gives off a sense
of the Ottoman period and the synagogue’s design is similar to architecture of
that time. Geometric shapes and patterns define the aesthetics.

Serenity and
beauty can be felt and viewed all around the interior of this one-of-a-kind
architectural wonder. You can picture all the families who once came here to
worship as they sat on the wooden benches, placed on either side of the synagogue.
The benches seem to be extremely fragile though, so be very cautious while
sitting on them.

Adding to the
legendary setting is a seemingly bottomless well, situated behind the
synagogue; many believe this is the site where the basket that the Prophet
Moses was placed in by his mother was allegedly found. Although the area is
fenced, you can get a glimpse of this well through the iron railings.
Unfortunately, there is no proper sign explaining its significance.

There is so
much more that could be done with this site. As a historical site, the Ben Ezra Synagogue has as much history and culture engrained into it as any other
tourist attraction in Egypt. Unfortunately, though, it’s poorly managed,
neglected, and will probably forever live in the shadow of Egypt’s Pharaonic and
Islamic history.