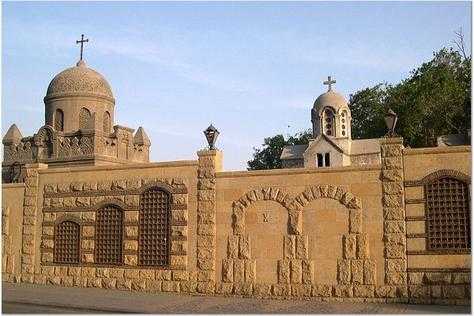 Conceptualising over five thousand years of Egyptian history kind of makes
our brains go fuzzy. The best place to learn about the period connecting the
death of the last pharaoh, Cleopatra VII, and the Islamic era is Coptic Cairo,
a neighbourhood that has fostered a vibrant Christian community for centuries.
Conveniently accessible from the Mar Girgis Metro Station or by taxi, charming
cobblestone roads connect dozens of churches, active monasteries and convents.
The following five sights are must-sees for any visitor to Egypt .

Upon exiting the metro, you’ll see the old Roman walls to your right. In
the 2nd century, the Romans built a fortress in Cairo
along this neighbourhood, which they called Babylon . The rounded towers of the western
gate of the Babylon fortress were built in 98AD,
and together with the existing southern gate, they are amongst the oldest
structures in Cairo .

This tall fortress once controlled traffic and trade along the Nile,
while it was also connected to the Red Sea
canal. The Roman Walls are visible from the street, and there is no fee for
viewing them or taking photographs.

Saint Virgin Mary’s Coptic Orthodox Church, or the Hanging Church ,
was built over the water gate of the old Roman fortress. It is called the hanging
church because the sanctuaries are actually suspended over what was once the
southern tower gate of the Babylon
walls. A functioning Coptic church till this day, its contemporary structure is
suspected to go back to the 5th or 6th centuries, though it underwent several
renovations and additions.

This impressive basilica has seven sanctuaries. There are dedicated
alters to the Virgin Mary, St. John the
Baptist and St. Mar Girgis. There are also several beautiful icons of Christ,
the Virgin Mary, Archangel Gabriel and St. Peter. From the 11th to the 14th
centuries, this church was the seat of the Coptic patriarchate.

Established in 1908, the Coptic Museum
houses the largest collection of Coptic textiles, tapestries, stone work and
other artefacts. The museum contains over 15,000 ancient antiques, many of
which were donated by the local Coptic community. The well-marked and recently
renovated museum guides audiences through a very educational history of
Christianity in Egypt .

Serving as the transition between a polytheistic culture to the Islamic
era, the Museum examines how Christian symbols took a new spin on ancient
Egyptian mythological characters and pharaonic icons. The museum is divided
into sections based on medium including textiles, frescos, stonework, woodwork,
metalwork, glass and ceramics. Open to special researchers only is the Naga
Hammadi Library, which houses 1200 ancient Coptic manuscripts.

The Church of St Sergius and St.
Bacchus

The Church of St. Sergius and St. Bacchus, also known as Abu Sarga, is
the oldest church in Egypt ,
dating back to the 5th century. Dedicated to two early martyrs killed in Syria by the Roman Emperor Maximilian, the
Church has a beautiful old basilica style and shares much in similarity with
the style of the Hanging
Church .

Rumour has it that this church was built upon the crypt that the Holy
Family stayed in during their flight in Egypt , escaping Herod’s
persecution. It is thus a popular pilgrim destination for many Christians. The
house of worship is laden with interesting geometric crosses of ivory and
ebony. There are also several icons of St. George and John the Baptist from the
18 th century.

Just behind the Hanging Church , you’ll find Egypt ’s oldest synagogue. Originally
built as a church in the 4th century, the building was sold to pay the taxes
imposed on the church by Ibn Tulun’s government. It was bought in the late 9th
century by Abraham Ben Ezra, former Rabbi of Jerusalem, after whom the
synagogue is named.

Legend has it that an adjacent spring marks the place where Moses was
found in the reeds. This is also a tourist attraction; because tradition holds
that this is where famous medieval rabbi Moses Maimonides worshipped when he
lived in Cairo .
The synagogue has a famous archive of ancient and rare Jewish manuscripts,
which have given scholars insight into the North African Jewish community of
the 11th and 13th centuries.

If you have more time to spend in Coptic Cairo, check out the Greek
Chapel of St. George, the Mosque of Amr Ibn Al As, Church
of St. Barbara as well as the Greek Orthodox
Cemetery . To view a map
of these and other sites; visit the map on Coptic Cairo’s website.