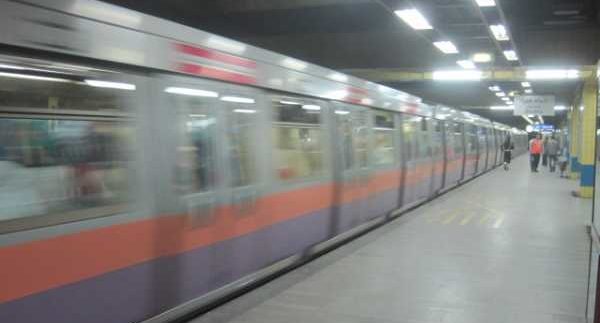 Your taxi cab swoops past overloaded microbuses and motorcycles, seemingly making good time, until it suddenly plunges into a traffic bottleneck that snakes onward for kilometres in the baking heat. Sweating in your seat, you start counting the rising fare in your head. It’s at this point that the thought does occur: ‘There’s got to be a smoother ride than this.’

In fact, there is a smoother, cheaper and faster option, but you have to go underground to get it.

The Cairo Metro was a long time coming. After nearly four decades of planning and counter-planning [read: bickering] between French, Russian, and Japanese engineers, the Helwan line reached completion in the late 80s, followed by the Shobra line in the mid 90s. A third line crossing Zamalek and Mohandiseen is currently in the works, and, if the metro’s construction history is any indication, it’s slated to be finished sometime between 2017 and… the completion of a fourth Great Pyramid. Phantom lines aside, those tracks already in place are exemplary, and offer a sense of reliability amidst the unpredictability of city life.

The two lines are easy to navigate, and between them you can reach a majority of neighbourhoods in the city for only 1LE per ticket.  Trains arrive reliably every 3-5 minutes from early morning until past midnight. The cars themselves are clean and ventilated, and the middle-two cars are reserved for women only. On top of it all, it offers a cool reprieve from the heat on the streets.

It’s true that the metro does suffer from occasional technical problems: the occasional flickering out of in-car lighting (much rarer on the Giza-Shobra line) and turn-styles that seem to jam up on occasional whim. Still, it’s a system that outclasses most of the metros this reviewer has experienced in the US and Europe.

No matter the system’s efficiency or reliability, however, its greatest source of unpredictability always comes from its passengers. The two lines carry around 700 million riders per year, and on average 2 million per day. Amidst this, there are more than enough examples of good-natured Cairenes who are happy to give directions, volunteer their seats to women and the elderly, or share a laugh over fumbling through the doors.

Let’s face it, though: clutching onto plastic rings and being shoved against sweaty strangers in a confined space can prove an awkward experience in any country, and the Cairo Metro’s commuters have their own set of peculiarities.

French Leader Charles De Gaulle once said, “I have against me the bourgeois, the military and the diplomats- and for me, only the people who take the Metro.” Then again, had De Gaulle proclaimed this in Sadat station on a late afternoon, he may have been knocked over seconds later by…

The Rush Hour Stampede: Entering the underground at rush-hour, many Cairenes suddenly seem to forget that trains arrive every 3 minutes or so. Instead, large groups race up stairs as if every train is their last, pushing manically past fellow commuters to board through whichever door possible, often without waiting for those inside to get off. This sort of shoving can be a real problem, and recent attempts to regulate crowds with specific entry and exit doors have yet to set in.
Entrance and exit is further complicated by…

Door Guarding: Many men also find it necessary to lean face first into the walls and doors, as if trying to passively claw their way out before the next stop. Unfortunately, this has less to do with fear of this writer’s imposing figure and more with trying to ensure a quick exit from the car…even if they aren’t getting off for five more stops. It’s long enough to notice…

The Stares: There’s a general understanding on some metros that one doesn’t make any kind of sustained eye contact with fellow passengers. The rule in Cairo appears to be the opposite, leading one to believe people get bonus points for not blinking. The mind wanders. Is there a stain on one’s shirt? Or maybe they think this reviewer has…

Swine Flu: In light of the recent fears of H1N1, coupled with its association with foreigners, more than once this reviewer has hopped through the metro doors only to be met with looks of dread, as about half a dozen people—nowhere near subtly—raise tissues to their mouths in unison to protect themselves from the possible foreign plague-bearer. One could feign offense at this, but then again, it’s great to have the extra space.

For all its quirks both human and technical, the Cairo metro is still inexpensive, reliable and safe. For all the unpredictability of Cairo’s streets, it’s nice to know that when things get hot, you can always head underground. And remember- there’s another train coming in 3 minutes.