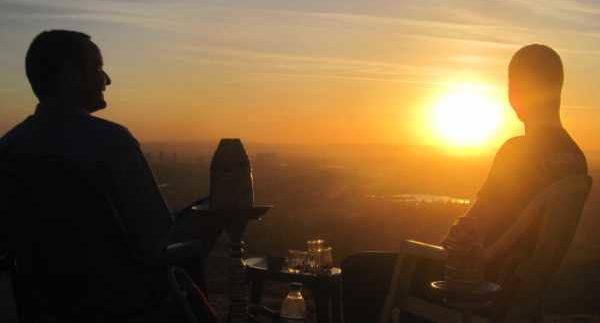 There’s a bizarre sound atop the Mokattam Hills, one uncommon to Cairo. It’s a sound as satisfying as a puff of apple shisha, as you sit perched above the blanket of haze hanging over the full city view in front. What soaks the air most up here isn’t the smog, but the sound of quiet.

Immersed in Cairo’s daily whirlwind of noise and activity, it can be easy to forget how close to the desert’s silence the city actually is. Down by the Nile, thousands of cafés may offer tea and shisha, but few can serve up this sound, let alone this view. These alone are reason enough to head for the hills.

Getting there is no great odyssey, either— roughly a 25LE-taxi ride from Attaba. Sunset is no doubt one of the best times to appreciate the panorama, as long as you bear in mind that it may mean cutting through some rush-hour traffic.

Setting out from Midan Opera takes you past Khan Khalili’s late afternoon twirl, then up narrow, winding lanes, and onto the open drive towards the imposing silhouette of the Citadel. The hills are also surrounded by a medley of tombs and famous graves, the Friday Market and the Church of Saint Simeon the Tanner, whose namesake is said to have performed the miracle of moving Mokattam Mountain itself.

As the cab approaches, it becomes clear why this would be a miracle; the dusty hills’ 650-foot cliff-face looms like a second citadel over the valley, and is just as imposing. That said, once on top, you find yourself in what feels like an independent town full of wide, smoothly paved streets lined with Pizza Huts and Metro Marts in a manner reminiscent of suburban America. Lavish villas line the cliff-side road, with several cafés perched across the street on the cliff-edge.

The taxi pulled up to an apparently vacant strip of dusty gravel along the cliff’s edge. Within moments, we were immediately greeted by a man holding plastic chairs and asking us what flavour of shisha we’d like; the nearby café caters to this seemingly empty spot. The hushed hilltop atmosphere provides a great perch for relaxed conversations in the sinking sun. The seats are set down few feet away from the cliff-edge, which, combined with one shisha hit too many, can lead to a touch of vertigo. Try to keep your balance, though; the café owners don’t have any cranes to fish you out of the valley floor, and it will seriously inconvenience your friends.

The bill, too, can be a bit dizzying (20LE for tea and shisha), but you are paying for more than Lipton yellow label and a handful of tobacco; mostly, you’re paying for the view. And it is well worth it.

The gorgeous magentas and peach shades of sun melting into the haze are reason enough to visit, but their effect would pale without Cairo’s vast texture as a backdrop. The scene stretches out westward over a sea of jumbled rooftops and minarets, across a shimmering Nile, towards the dark points of pyramids jutting through the hazy horizon.

Amidst all this, Mokattam is also a large part of what you’re looking out on. The foot of the hills has been used as quarries since Menes founded Memphis nearly 5,000 years ago. Four centuries later, the limestone of these cliffs became the building material of choice for the temples and tombs of noblemen; pieces of which been stolen, dispersed and recycled into the fabric of many of Cairo’s older houses and buildings. The stone was later employed for the city’s mosques and the tombs of medieval holy men. Even the mighty man-made Citadel owes its material to its natural counterpart on the other end of the valley.

Today, the stone at its cliff-base is blasted by dynamite and pounded into Portland cement in outlying factories; it’s a material responsible for the construction of many of modern Cairo’s buildings that fill the urban landscape. The factories in the distance puff its white cement ash skyward, spewing a million tons of it into the air every year. The ashes of Mokattam join the hanging haze on the horizon, the same haze that makes this sunset so unique.

The fact is you’re already breathing in Mokattam, in more ways than one. So lean back with a shisha, relax, and puff out a bit of your own personal contribution to the collective Cairo cloud. Most of all, though, enjoy the view.