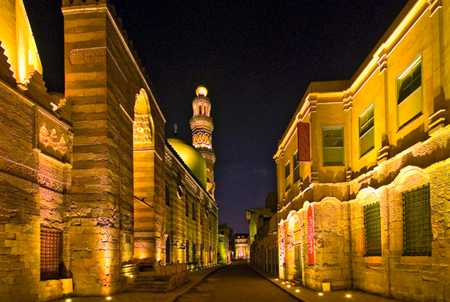 Coming out of Cairo’s Khan
El Khalili Market after dusk and heading west toward El Muezz El Din Street,
first-time visitors will not be prepared for the breathtaking splendour
awaiting. Walking north on El Muezz Street past
the perfumes, spices and copper markets towards Bab El Futuh, you will slowly
come across what was the walled city’s major thoroughfare, filled with floodlit
domes and minarets recently restored to their former glory.

El Muezz Street is
named after the Fatimid caliph who conquered Cairo in AD 969, and whose
successors built the monuments still standing today. Though severely damaged in the 1992
earthquake, the restoration is now complete and many of the buildings are
looking better now than they did before the quake. The area directly between the copper market
and Sabil Kuttab in the middle of the street is called Bayn Al Qasrayn, named
after the beautiful palaces that once stood there during Fatimid times. After their ruin, they were replaced by three
spectacular madrassas during the Mamluk era, which are the highlight of the
street now and part of Cairo’s most impressive streetscapes.

Bayn Al Qasrayn used to be a place for couples to stroll through at
twilight. It now features the area’s
three most prominent buildings built by three of the most prominent Mamluks. The
first is the madrassa/hospital/mosque/mausoleum of Sultan Qalawun (simply the
Qalawun Complex), which is by far the most grand of all three. Built in 1279 in only thirteen months; it is
the oldest and most ornate of the buildings. Combining Syrian and Christian crusader architecture, its interior is a
splendid array of detail featuring mashrabeya, stained glass and painted
ceilings, as well as marble walls, pearl and glass mosaics. Symbolic
representations of stars, shells and flowers are dotted throughout the building. At its height, the hospital provided free
medical care, storytellers and musicians to brighten weary spirits, and even
doled out money to patients upon discharge to help with lost wages. Today, there is a modern eye clinic in its
place.

The second
building is the madrassa and mausoleum of Caliph
Al Nasir, built in 1304 by Qalawun’s second son, who ruled at the height of
the Mamluk dynasty.   Nasir was a lover of
public works and built 30 mosques, an aqueduct and a canal during his
rule. This Madrassa’s gothic doorway was
brought back from a church in Israel after his army defeated the Crusaders in
1290 (notice the Islamic modification at the point of the arch– reading ‘Allah’). The mausoleum is dedicated to his mother and
favourite son.

The third building
is the madrassa and monastery of Sultan
Barquq, a Sufi school and monastery completed in 1386. The highlight of this building is the
colourful ceiling, especially in the sanctuary, where it is beautifully decorated
in blue and gold. The mausoleum was
built for Nasir’s daughter, and you can climb up the minaret for some amazing
views of the old city.

Continuing north
up El Muezz Street, you will come to the striking Sabil Kuttab in the middle of the street at a fork in the
road. The fountain/school was built in
1744 by an emir seeking forgiveness for his sins by providing locals with water
and religious education; it is one of the most recognisable landmarks of
Islamic Cairo and has been depicted in innumerable paintings and lithographs of
the old city. Inside is beautiful blue
ceramic work that can be viewed up close, if you can track down the keeper.

Keeping to the
left of the fork, the Mosque of El Aqmar is the next building to note. With its
decorated stone façade, it was the first of its kind in Cairo and is the oldest
stone-façade mosque in Egypt. Built in
1125 by one of the last Fatimid Caliphs, it’s named after the way that it
shines in the moonlight.

Just off of Muezz
Street to the right on Darb El Asfar is Beit
El Suhaymi, a great example of the life of the wealthy at the time. The
family mansion and merchant’s inn was built in 1648 and features extensive mashrabeya,
a tree-filled courtyard, and a haramlik with stained glass and painted
ceilings. For more information on Beit El Suhaymi, see our museums article here.

Finally, just
before Bab Al Futuh and the end of the street is the El Hakim Mosque, which shares a wall with the old city’s
fortifications. Built in 1013, it is one
of the oldest mosques in Cairo, though it’s been
used for anything but worship (prison, stable, warehouse, school,
asylum) until recent renovations by Shiites from Brunei in 1980, who revere Caliph Hakim
as part of the Druizm that he inspired. Adding many new features such as chandeliers
and a new mihrab; the wood beams and minarets are the only remaining features
of the original.

Bab El Futuh marks the end of the street. Built in 1087, the gate
was one of the two main entrances to the Fatimid city of El Qahirah– the other being Bab El Nasr just to the east. The
annual caravan of returning pilgrims from Mecca used to enter Cairo from here. The
stones to build the gate were taken from the ruins of Memphis, while carved animals and Pharaonic
figures can still be seen on some slabs.

The street is
chock-full of history and the remnants of the lives that built the foundation
for the modern city. Also in the area,
the Egyptian Textile Museum (located in the 19th century Sabil of Muhammad Ali) is open daily from 9AM to 4:30PM and includes
many Coptic and Islamic textiles.

What
better time to go discover a fascinating part of Egyptian history, whose
influence can still be seen on Cairo’s
streets today?

* El
Muezz Street is pedestrian-only until 8PM, and
many of the monuments are open daily from 10AM to 10PM.