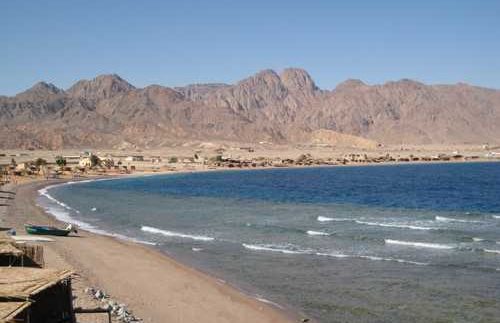 Located on the North East side of the Sinai Peninsula
and about an hour’s drive from Nuweiba, Ras Shetan is a collection of rustic
Bedouin-style camps on the Red Sea. A trip to
Ras Shetan strikes fear into the hearts of parents; so do us a favour and tell
them you’re headed to the general region of Basata– the lack of allusion to the
devil is comforting. Name aside, Ras Shetan is a perfectly safe place to visit
and is one of the most beautiful corners of Egypt. Although just a six-hour
drive from Cairo,
this area remains cheap and under-developed and is a great place to escape the
vanities of urban living and get closer to the land.

If you have a sturdy car, driving to Ras Shetan is a
good option to avoid being at the mercy of an overworked bus driver. Groups can
consider hiring a minibus: many drivers offer a drop-off and pick-up service
for around 1000LE, which is reasonable when split between a big group. Ras Shetan
is also accessible by an East Delta bus from Cairo’s Almaza station to Nuweiba (about 80LE
for a one-way ticket). Make sure to keep your bags with you and tell the driver
exactly where you want to get off, though: Ras Shetan doesn’t have an official stop, so you’ll just be let off by the side of the road wherever you
choose.

Be sure to bring your passport with valid visa or Egyptian ID; checkpoints
are frequent on the route through Sinai and you will be delayed or sent back
without valid documents. High-rollers could consider flying to Sharm El Sheikh
and catching a three-hour bus ride up to Ras Shetan from there; but with all
things considered this probably wouldn’t save much time.

Camping is the name of the game in Ras Shetan. Regardless
of the camp that you choose to reside in, your accommodation will consist of a
sturdy hut in the hills or a shack by the beach. Both options are clean and
reasonably comfortable: the beach shacks have soft, sandy floors, while the
huts are a bit more private with elevated sleeping areas and private porches.
Both options start at about 25LE per night for as many people as you can fit.
Bathrooms are communal but clean with ample running water. Toilet paper is provided
for an extra fee; so you might want to bring your own.

The camps run on
generators; meaning that electricity will be cut at midnight, so make sure to
bring plenty of candles and flash lights with extra batteries. It’s also a good
idea to bring along bug spray, sleeping bags or sheets and pillows, and any
other comforts that you can’t live without. We recommend Ayash
Camp (call 010 4442147), a great choice with its friendly staff and a lovely
location complete with a massive beachside rock that’s perfect for star-gazing.
Other good options
are Castle Beach Camp (call 012 7398495) and Petra Camp (call 010 4722001),
which boast some of the best food around.

The food is one of the highlights of the Ras Shetan experience.
Breakfast is a feast of eggs, thin Bedouin bread, jam, butter, fruit salad and
beans or potatoes with coffee or tea, all for about 10LE. Snack options include
fries, pizza and sandwiches, which are available throughout the day along with
a selection of sodas and juices. At night, Bedouin feasts of rice and meat,
fish or vegetables with salads are made to order for your party. Most camps
have a tab system, where the staff keep track of your orders and you pay at the
end of your stay; so make sure to keep your own record to avoid any surprises. Food,
drinks and water for a five-day stay in Ras Shetan shouldn’t set you back more
than about 250LE if you eat a lot; so forget about money and enjoy the
surprisingly delicious fare on offer.

Relaxing is the main activity here, with tents and
chairs set up by the water for lazy bodies to occupy them. Bring books,
magazines, cards, backgammon and musical instruments to stay entertained all
day long. If you are a shisha addict; BYOS (bring your own shisha) and enjoy it
by the beach. If you don’t like to be completely sedentary, it’s also possible
to go for a hike in the craggy hills outside of the camps, or take a boat cruise
in the sea and explore the reefs in the area. Most people turn in early and
rise early at the camp to maximise daylight hours, but an evening spent by the
beach gazing at the stars is also one of Ras Shetan’s best forms of
entertainment.

Camps in Ras Shetan are usually open from spring to
late autumn and the weather is great throughout this period. For maximum beach
time; go between June and the first week of July, but be prepared to survive
without AC throughout your stay. It’s best to avoid Ras Shetan and Sinai in
general during August, when it’s unbearably hot without AC. An autumn visit
will still reap sunshine but the mosquitoes are terrible; so bring bug spray
and bug candles to stay sane during this time. Be prepared for a multicultural
crowd at the camps, with the area often populated by Israeli tourists during
popular Jewish holidays– the 6th of October weekend and the Easter holidays are peak
times for the camp.

Get a bunch of friends together and head to Ras Shetan
for a cheap and satisfying sojourn in the sun– this gorgeous corner of Egypt
just might become your new favourite vacation destination.