The Red and Bent Pyramids: Forgotten Pieces of History 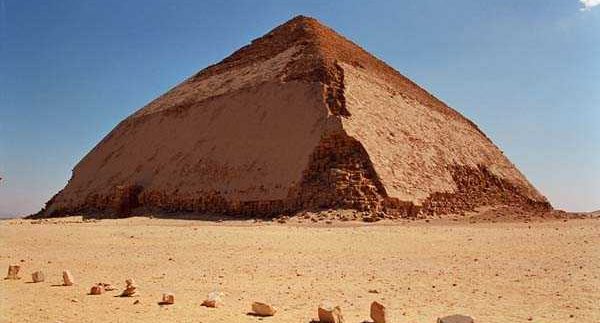 We’ve all seen and heard of the Giza Pyramids. Most likely they’ve
been a staple part of everyone’s sightseeing experience and many of
us have visited the them, either with family or on a class trip. Yet, how many of us have heard of
the Red and Bent Pyramids? These forgotten pyramids lie just sixteen kilometres
southwest of Cairo,
East of pristine Egyptian farmland. Their proximity to Cairo and quiet surrounding make them a perfect destination for the archaeologically curious and the alternative traveller.

These pyramids receive very few visitors,
which keeps the area calm and quiet: you may be the only person to roam the site
and climb inside the ancient structures. There are rarely any street-sellers crowding the
area like at the Giza Pyramids, allowing you to enjoy the site in peace.

The Red Pyramid was built around 2600 BC by Pharaoh
Sneferu, who developed pyramid architecture and technology that allowed his
son, Khufu, to build his grand pyramid in Giza. The Red Pyramid earned its name because of the red limestone
used in the inner chambers. However, it is known to the area’s locals as El Haram El Watwat. or the Bat Pyramid, because of the strong ammonia
smell from bat droppings left inside.

The pyramids’ blocks have eroded because they’re made of softer limestone and are unprotected from
the elements. The outer layers of harder limestone were stolen hundreds of years ago to be
used for other projects in Cairo.  The Red Pyramid’s entrance provides you with a truly spectacular view of the Saqqara and Giza Pyramids in the North. The pyramid’s interior has a very steep shaft that leads to two large burial rooms with amazing symmetrical vaulting. If you’re feeling brave and don’t suffer from claustrophobia, the rooms are a definite must-see.

The Bent Pyramid is just two kilometres south of the
Red Pyramid. Built before the Red Pyramid by the Pharaoh Sneferu, it
gets its name from the unique angles of its outer casing. The ‘bent’ nature of
the pyramid is due to the fact that after building a few layers, the architects
realized that their current angle of the sides was too steep for the pyramid
to be stable.

Due to
suspicious drafts within the pyramid shafts, some archaeologists believe that
there are still undiscovered chambers inside, while much of the outer
casing still remains, a rarity for Egyptian pyramids.

Today, a military base is located near the Red and
Bent Pyramids, which prevented the public from accessing the pyramids until the mid-1990s. Soldiers working on the base allegedly claim that at night they hear the sounds of
metal swords clashing out in the desert. There have even been tales of  sightings of Ancient
Egyptian warriors fighting in a battle on the plains near the Red and Bent
pyramids on moonlit nights.

Travel Tip: There is no road leading from the Red
pyramid to the Bent pyramid, so prepare for some rough terrain and make sure you hire a car that can drive across a flat but rocky desert
for a few kilometres to the Bent pyramid.