Ahmed Shawki Museum: A Quiet Tribute to the Prince of Poetry 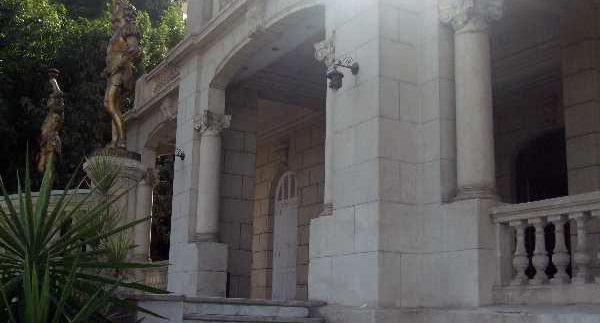 Despite their phenomenal architecture and historical value, Egyptian museums
often go unnoticed among the hustle and bustle of Cairo streets. Sadly, the Ahmed Shawki
Museum is not an exception. This Cinderella’s-castle-like house isn’t just
another museum; though. After all, it was once the home of an Egyptian poet whose
words shifted the country’s poetry and literature into another time.

Named the prince of poetry by his peers, Ahmed Shawki returned to Egypt from
political exile in Spain in 1920. Wishing to build a house that overlooked
both the Pyramids and the Nile; he chose a location in Giza that suited the
description. He later named the house Ibn Hani’s Vineyard in honour of the
great Arab poet and Shawki’s idol, Abi Nawwas.

The house wasn’t merely a home for Shawki and his family; it was a
meeting point for Egypt’s
finest writers, philosophers, and singers during the 20th century. In 1977
after half a century of Shawki’s death, the house was opened as a public museum;
keeping most of the original contents as they were and presenting today’s
modern Egyptians with a glimpse of how simple and glorious life was at the time.

Once hugging the mighty Nile, the
bigger half of the museum’s front garden is now the busy Corniche Street. The rest of the garden
hosts Shawki’s splendid bronze statue, which was created by late Egyptian
sculptor Gamal El Seguini. It is a duplicate of the poet’s statue that sits
proudly in Bourgese Park in Rome
besides other iconic literary figures.

There’s something about the interior of the museum that doesn’t make you
want to leave. Maybe it’s the atmosphere of a forgotten time that greets the
visitor at the door, or the feeling of Shawki’s presence in the house through
his pictures and handwritten notes. The squeaky wooden floor, large doors and
vintage furniture all add to the charm of the place.

Unfortunately, not everything in the museum is original: some things had
to be renewed like carpets and curtains. At a first glance inside the museum, a
huge mirror in an imperial golden frame greets visitors. The mirror was brought
from France
alongside other furniture and decorations.

Through the museum’s eleven rooms, we can see that the poet’s lifestyle
was extravagantly luxurious at the time, yet it had character. In his room where
he preferred to write at night, his chair is still preserved along with the
rest of the room’s furniture. It’s truly an experience to see the exact
environment that helped nurture Shawki’s poetry and character. Since he spent
most of his time in his bedroom– the same room that he actually passed away in–
it is considered the most indicative of
Shawki’s presence in the museum.

The main reception – also known as the eastern hall– is known for its
fine decoration and Arabic ornamental carvings on the walls and ceiling. The
reception once hosted society’s most intellectual discussions as well as
royalty: Khedive Abbas of Egypt visited Shawki on the occasion of his
daughter’s wedding. The special suit that Shawki used to wear on such occasions
is displayed along with his medals and trophies in a small room in the second
floor.

However, the most notable items are the photographs; each room or
hallway is decorated with at least a dozen of them. Most of the portraits are
family-related, it’s clear that Shawki cherished his family and grandchildren
throughout his life. Other photos are of famous leaders and public figures that
were acquaintances or admired by the poet. His love for the Egyptian landscape
is exemplified by the number of photographs and paintings glorifying the Nile and Egyptian desert.

The quiet and simple appearance of the museum’s exterior is misleading,
because there’s an unexpected but pleasant historical experience inside. Seeing
this museum will give a new perspective on the personal life of this brilliant
poet, which has been carefully and successfully preserved for future generations.

Tickets are 1LE for Egyptians and 3LE for foreigners. The museum is open every day from 9AM to 5PM; except for Mondays.

Besides the valuable and interesting belongings of Shawki, the art collection – including a rare one of Napoleon Bonaparte – is the highlight of the museum. A free guide is also assigned to show visitors around the museum.

The museum desperately needs better care and cleanliness of the items.