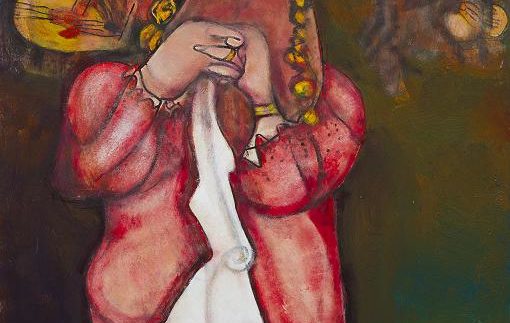 To mark it’s four year anniversary Al Masar Gallery in Zamalek has decided to combine some of the best art that it has exhibited over the last four years in what they’ve titled the ‘Gallery Collection’
exhibition. Combining influential artists such as Georges Bahgory, Leila Izzat
and Adel El Siwi, the result is an enriching and potent display of art.

Considering the overall number of artists
being displayed, the exhibition literally eats up every wall of the space.
Paintings are found hung in the back offices, in the hallways and literally
everywhere there is surface area. The items are not in any specific
order and paintings by different artists were almost randomly hung around.

The styles and approaches vary greatly;
Taha Hussien paints in vibrant speckled colours matched with abstract stick
figures swept across the canvas, while next to his work, a more subdued piece
by Leila Izzat depicts two horses in washed colours.

There are several highlights in the
exhibition. A piece by Ahmed Farid has people painted as blocks of colour,
resembling crayons in a box. Hamdi Attia uses typography on his more abstract
dreamy scene of flying hot air balloons dripping in paint; the caption reads
‘Paid for by photojournalism and art’. A large piece by Omar El Nagdy has
textured paint that looks like it’s been mixed with sand, or like the canvas
has been covered in blue cinnamon sugar.

Other standouts include pieces by
Georges El Bahgory. Considered one of the fathers of Egyptian caricature,
Bahgory’s characters portray the same exaggerated visual language associated
with this genre. A painting with a lady that bears some resemblance to Om
Kalthoum shows her grasping onto a handkerchief, pleading in some way with her
eyes directed at the sky. Her round cheeks and cartoon elements make for a
charming, and dare we say cute, outcome. Another absolutely captivating piece by
Bahgory is hung in another room of the gallery and unlike the above-mentioned piece;
there is something distinctly dark and twisted about it.

What seems like mixed media, the sizable
piece is blander in colour than his other work but the subjects are, on
the contrary, animated and moving. With an upside down horse at the top right
corner, a seated camel and a painted blue portion that may signify the Nile,
the rest of the canvas is filled entirely with faces and hands. Crowded and
overwhelming, the characters look like an overcrowded bus of refugees
struggling to breathe or get out. It is most absorbing.

Another notable item in the show is the sculpture
‘King of the Throne’ by Sobhy Guirguis. His little alien character, as it shall
be referred to, is quirky, funny and heart-warming for some reason. Essentially
an abstract figure, the small black structure has a long face with bug eyes and
a solemn expression. Little hands stick out from somewhere behind its elongated
head and beneath it its feet stick out, sturdy on the ground.

Bringing together such a lavish collection
of artists under one roof has proved to be a great venture. The exhibition is
engaging and fulfilling; it gives a thorough picture of the Egyptian art scene.

Al Masar is open every day except for Friday, between 11AM and 9PM.

The gallery itself is an ideal location for this kind of exhibition.

Some of the captions next to the pieces were a mess.