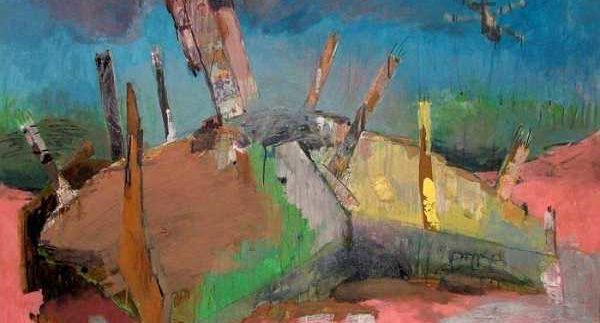 The adage ‘a picture is worth a thousand words’ rings true for Egyptian
artist Hamdi Attia, whose current exhibit Re-Presentation is being held at Al
Masar Gallery in Zamalek and finds inspiration in photojournalism. After
examining a number of photographs from published news sources, the artist began
to find deeper layers of meaning in the photographs’ aesthetic components. In Re-Presentation, Attia recreates these
images through abstract paintings.

The exhibit’s concept is an interesting one. Often, when we view the
photographs attached to a piece of news, we don’t analyse the images on an
artistic level; rather, we see the image solely as a means for transmitting
further information about the story itself. This is despite the fact that there
is outstanding and visually stunning work that comes from photojournalism. Attia’s
exhibit asks us to consider these works on a different, purely artistic level.

The exhibit unfortunately suffers from too much portraiture as well as
some lesser known references. The colourful, abstract ‘head shots’ are
aesthetically appealing; but they lose much of their meaning as they are taken
out of context and unidentified.

A large painted canvas entitled Could Be Viewed as a Generous Reading of
Oldenburg’s Split Button is another piece that may be lost on Attia’s
audience. The painting is a representation– presumably of a photograph– of a
sculpture that sits on the University of Pennsylvania campus, where the artist received
his Master’s degree in sculpture. Again, the painting was an interesting
perspective on the sculpture, but it didn’t particularly advance the message of
the exhibit.

However, some of the paintings were decidedly appropriate for a
collection based on photojournalism. There were eye-catching and
thought-provoking scenes of cities almost entirely blurred out with blotches of
dark paint, possibly representing blackouts, pollution or destruction. A number of pieces represented oil rigs and
oil spills, presumably having been based on coverage of the oil spill in
the Gulf of Mexico earlier this year. Had the whole exhibit been inspired by recognisable events; it would be
more effective as a study of photojournalism.

The exhibit could benefit from a larger space. Al Masar Gallery is not a
small venue, but hanging several of the larger canvases in narrow hallways is a
poor choice for abstract work.

Still,
the exhibit’s art is provocative and the mixing of pop art influences with the
abstract paintings has an appealing effect. Re-Presentation will certainly make us look at the news a little differently
in the future.

Al Masar gallery is located next to Abou El Sid in Zamalek.

Some of the unidentifiable works needed stronger reference points.