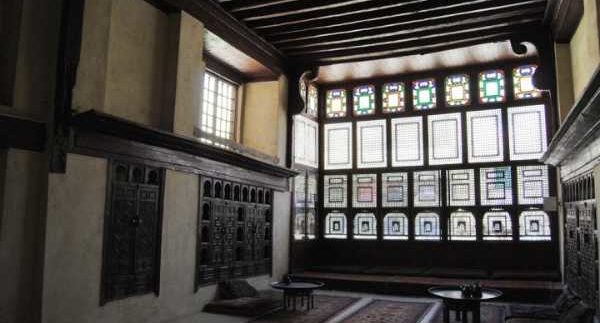 A stroll down Cairo’s Muezz El Din Allah Street will
bring you through a busy area of Egypt’s famous Khan El Khalili. Beyond the narrow alley of jewellery shops and
eager shopkeepers, this famous street opens up and becomes a charming
cobblestone street. This northerly end of Muezz Street is home to several
attractions and has seen a bit of a revival over the past decade. Much of this is due to the renovations of
Beit El Suheimi, one of Cairo’s historical treasures.

Beit
El Suheimi is a complex of two homes built in the 17th and 18th centuries.   Thanks to Cairo’s prime location on the
trade route, many of the city’s residents lived in elegant homes, and Beit El Suheimi is considered one of the finest remaining
examples of merchant homes.

The complex
had long fallen to ruins with walls crumbling and wooden screens broken
apart. For years, Beit El Suheimi sat in
its dilapidated state, unused and unappreciated. However, a painstaking 1990s project to restore
the historic site to its original state proved not only beneficial for the
building; but for the entire neighbourhood as well.

Since the massive renovation of Beit El Suheimi, the structure is now
open to the public as a museum and for a variety of performances. During
Ramadan, the house is an especially popular site for concerts and performances organised
by the Ministry of Culture. Beit El Suheimi is also great year-round for
Tannoura dances and storytelling or for a quiet afternoon tour.

Tickets cost 3LE for Egyptians and 30LE for foreigners to tour the house any day from 9AM to 5PM. Through the
large wooden gates and down a dark hallway, Beit El Suheimi opens to a central
courtyard that would be flooded with light if it weren’t for the palm trees shading the grassy spot below.

The first room of the house is a grand reception with impressively high
ceilings and a long chandelier. Despite the simple stone walls, the room is
grand with intricate wooden mashrabeya screens allowing for minimal light but
incredible privacy. The beautifully designed screens are a feature throughout
the house, adding a rich tonal contrast to the stone structure.

Several more grand rooms make up the first floor of the structure. Any visitors that are afraid of the dark or do
not enjoy enclosed spaces may not want to explore Beit El Suheimi much further.
The second floor is a bit of a maze, and dark, thin halls often lead to darker
rooms with low ceilings. Some of the
rooms are completely empty except for a layer of dust caked to the walls, while
others have carpets and a few tables and accessories. One second-floor room
lacks the screened windows but has a lovely balcony with a bright view of the
courtyard below. This room has a
seating area and is great for catching your bearings while exploring the rather
disorienting house.

After exploring the maze of the house, the last stop should be behind
Beit El Suheimi, where a second courtyard displays a series of photographs
depicting images of Beit El Suheimi before, during and after the recent massive
renovations.

Don’t forget to check out the photography in the back courtyard to see the incredible transformation of Beit El Suheimi.

The courtyard of Beit El Suheimi doubles as a quiet haven from Khan El Khalili by day and a tannoura stage by night.

Some sections of the house are a little dark and disorienting.