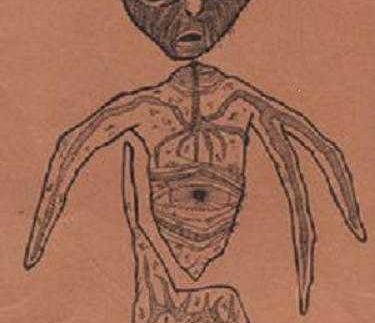 A vivid
imagination can transport the mind to strange perceptions of reality and a
whole other realm of possibilities. In the line drawings, water colours and
structural art of Ali Abdel Mohsen’s current exhibit, A Voice from the Clouds,
the artist gives us a glimpse into his dramatic imagination.

Showing until
22 September, Mohsen’s collection will be displayed on the second floor of Darb
17 18 in Old Cairo. Be warned that this
exhibit is not suitable for young children or the faint of heart; a substantial
portion of Mohsen’s work is quite graphic.

A Voice
from the Clouds sounds as though it would be an optimistic if not serene
collection of work. On the contrary, the
voice inspiring Mohsen’s art is often violent and peculiar, to say the least. The pristine white walls of the exhibit hall
are in stark contrast to the dark images of otherworldly characters on white
paper affixed to cardboard.

A few tamer members of the cast include figures
with sabre-toothed faces and bodies shaped like creepy hands, and creatures
with multiple mouths and a half dozen eyes, whose upper body and lower body are
somehow disjointed. The most graphic
images are too risqué to speak of, but a number of scenes portray dismembered
figures facing nightmarish situations. While the creatures fashioned in the
artist’s imagination are foreign to our concept of beings, a range of human
emotion is recognisable.

A large
black pyramid occupies the central space of the first room of the exhibit with
red rings hung from the ceiling, which seem to emanate from the pyramid’s
point. The second room holds a structural display of city buildings either
going up in flames or being shot at with a laser gun. These images are disturbingly echoed and
expanded upon in a number of works illustrating urban destruction.

There is
something reminiscent of Tim Burton in Mohsen’s eerie creatures. The style of
highly detailed sketches, the figures that can’t possibly exist in our world
but are so alive and real in the dreams of the artist; these are themes we see in
the highly creative work of the famous director and artist. We certainly don’t
often see someone willing to step so far outside of the norm here in Egypt, and it
is refreshing to see, even if some of it reads simply as shock-factor.

If you are with children, you may want to check the exhibit out alone first to decide whether or not it is suitable for your young ones.

With much conviction, Ali Abdel Mohsen takes his audience into the depths of his imagination.

Some of the graphic work is sure to offend some audiences and this isn’t clearly stated anywhere before entering the exhibit.