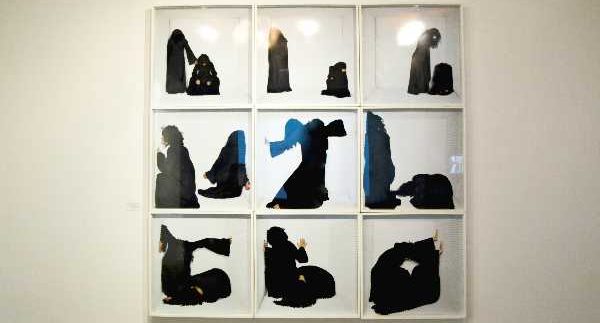 Darb 17 18’s current exhibition
is a collaborative product of artists hailing from North Africa and the Middle East. Entitled Hiwar, the exhibit aims to bring together the diverse
perspectives to pick up the pieces lost along the way in an era of open
communication. Through a variety of mediums including photography, videos,
paintings and installations; Hiwar is bound to spark some interesting debates.

Because of each artist’s diverse
experiences and perspectives, Hiwar as an exhibition is a bit disjointed. It is
rather a stretch to display all these works in the same series, and the written
passage that introduces us to the exhibit does little in the way of binding the
pieces together for a cohesive exhibit. Still, it is a nice sampling of what
some of the region’s contemporary artists are producing and is an opportunity for
some local recent art school graduates to showcase their work.

Several pieces of this
collaborative exhibit stood out from the crowd. Tragedy by Tunisian artist Meriem Bouderbala is an eye-catching installment
of red police tape affixed to the walls, floor and ceiling in dozens of places,
crisscrossing chaotically through the space. On the ground at the
installation’s centre was a framed photo of the same scene with a figure lying
in the middle. A passage next to the work referenced endless violence and
struggle while questioning the reason for such tragedies.

Sama Alshaibi and
Dena Al Adeeb from Iraq had an interesting two-part piece, where each part was
displayed across from the other. A series of photographs feature two women
dressed in long black robes in a white, padded room. Across the way, a video is
projected and includes images of words being scrawled onto a chalkboard, as
well as video footage of the women moving throughout the confined space.

The gallery’s upper level is entirely
devoted to a video by Iraqi artist Adel Abdin, who studied in Helsinki. Entitled Ping Pong, the
risqué clip features a woman where a net should be on a ping-pong table during
a match. It is slightly disturbing, but
worth checking out– perhaps without children.

Moataz Nasr’s 2004 award-winning
video The Echo really steals the show at Hiwar. This moving piece
shows two clips side by side of the same monologue from the 1969 film Al Ard.
The first clip is the original; the second is an impromptu performance by
Chirine Al Ansary in an ahwa in Cairo. The piece illustrates the chilling truth
that much of what was relevant in the 30s was relevant in the 60s, and it remains
relevant today. The Echo is not to be missed.

A few works needed some
additional editing before they should be displayed.   While we love a bit of history on the artist
and possibly a brief description or a creative writing piece alongside each
work, we shouldn’t need a full-blown description of what the artist is trying
to portray; as was the case with several works in Hiwar. The curator was also absent during our afternoon
visit; so we suggest heading to Darb 17 18 in the evening.

When you’ve finished checking out the exhibit; check out Darb 17 18’s rooftop space, where you can enjoy the surrounding view and Cairo skyline while relaxing on the cushioned couches.

The Echo really steals the show.

Not all of the art is of the same calibre.