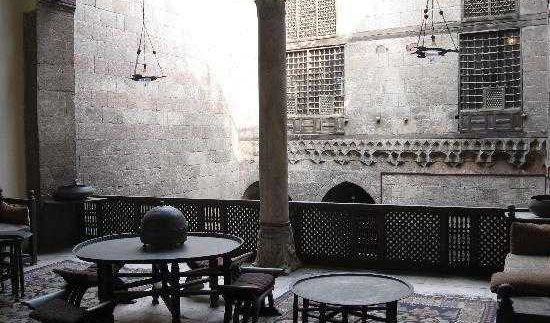 The walls surrounding Egypt’s
Ibn
Tulun Mosque were once flanked with houses. Left unkempt for years, most of
the 16 and 17 century abodes were demolished by the Egyptian government in the
1920s.   However, one ancient structure
escaped this fate when it was found that the house was remarkably well
maintained.

In 1935, Major R.G. Gayer-Anderson was a British national on assignment
in Egypt,
who was granted permission to reside in the house.   An avid collector and self-proclaimed
Orientalist, Gayer-Anderson filled his residence with beautiful pieces spanning
a number of eras and cultures. Upon his return to England in 1942, Gayer-Anderson
left his collected pieces in the house as a donation to the Egyptian
government. In return, he was granted the title of Pasha and the house became
known as the Gayer-Anderson
Museum.

The structure known today as the Gayer-Anderson Museum is actually two
houses built nearly a century apart. At some point in the structures’ history,
a bridge was built to link the two houses together; thus becoming a single
residence.   Although the houses have seen
a number of inhabitants and centuries of history, it was the British
Orientalist who filled each room with the prized possessions that remain in the
house to this day.

Entering the premise, visitors find themselves in an interior courtyard
with a fountain that some believe to be enchanted. Unfortunately, at the time
of this reviewer’s visit, the fountain was empty, thus we were unable to test
the supposed powers for ourselves.   A
small sign marked ‘visitor’s route’ will direct you up a flight of stairs to
the interior of the older house, the one located farther from the mosque’s
wall. Upstairs, the loggia– a breezeway open to the courtyard– has several
seats for admiring the view below.   If
you’ve walked to Sayeda Zeinab, this would be a good place to rest for a few
minutes before continuing on your winding tour through the museum.

Many of the rooms in the house have placards offering information about
the room itself or the contents on display, although you may have to fight for
the chance to read the information.   This
is not due to crowding in the museum; like many of Egypt’s
lesser known historical gems, the Gayer-Anderson
Museum is not often
crowded.   However, scattered throughout
the site is a number of employees, each responsible for guiding visitors
through two or three rooms.   These guides
have a tendency to move quickly and speak a lot without saying much– mostly
pointing out alabaster tables and mashrabeya without providing a lot of
historical information. Don’t let these guides rush you through the building;
the signage provides many useful facts and the slower you move, the more you’ll
discover about the house.

Rooms include salamlek – for receiving guests, haramlek– where women
could visit in privacy, libraries and bed chambers. Rooms are elaborately appointed with furniture from
all over the world.   There is a room
holding antique furniture entirely from China.   Another room has chairs from India.   Italian chandeliers, English made tables, and
Persian rugs are all found amongst Gayer-Anderson’s collected pieces.   A room known as the House
Museum was used by the Major to
display a number of Egyptian artefacts he collected including a mummy case from
Thebes and a
statue of the head of Nefartiti.

The Gayer-Anderson House
enjoys a sizeable rooftop with an incredible view.   mashrabeya screens allow women to enjoy the
view without being seen from below.   A
large opening of the mashrabeya frames the minaret of the Ibn Tulun Mosque and
two openings in the screen are designed for views of the El Sultan Hassan
Mosque and the Mohamed Ali Mosque.

Open to the public from the hours of 9AM to 5PM, entrance to the museum costs 55LE for foreigners, 21LE for foreign students, and 2LE for Egyptians.   To reach the museum, travel along Muezz Street until you see the minaret of the Ibn Tulun Mosque.   Cars are not permitted on the road leading to the museum’s entrance so park or get out of the cab and head up the hill about 100 meters until you reach the compound of the Gayer-Anderson museum and the Ibn Tulun Mosque.