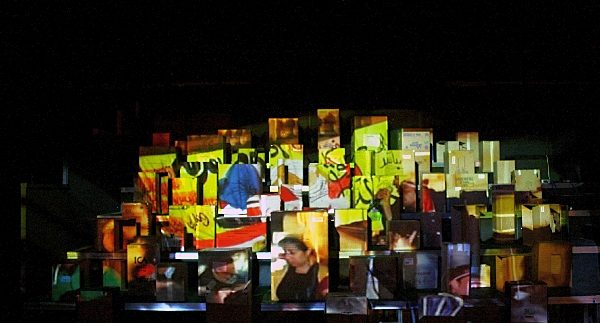 As the second round of the presidential elections approaches, frustration, confusion and even resignation are widely felt across the country. “I don’t know what to do. If I knew, I’d tell you. There’s something missing, and we don’t really understand what’s going on,” says Karim Bakry, an Egyptian photographer and visual artist who from day one captured the revolution through his lens. Responding to a request by a gallery in Gothenburg, Sweden last September, Bakry compiled the images for an installation, now on exhibition at the Mashrabia Contemporary Art Gallery in Downtown.
Steps from the epicentre of the uprising, in a dark, cramped room, ‘Missing Pieces’ features a slideshow on loop of some hundred photos taken over the course of the revolution. The montage begins with portraits of optimism, in which youth pose and come together with their families under red, white and black bunting. The show then progresses, or rather regresses, into poignant images of the clashes between protesters and armed forces, tear gas, violence and curfew.

According to Bakry, ‘Missing Pieces’ represents the fragmentation of the revolution: “The spirit of the revolution ended up breaking down and as time passed the sense of unity was lost and divided into different sects.” He captures this fallout by projecting the photos onto staggered, cardboard boxes, forcing a metaphor blankly contrived.

“The boxes represent two things. First, they give a feeling of waste and consumption that exist in cities like Cairo. Also, the brown boxes when laid out together give a sense of Cairo and its brown, box-like buildings. The images projected onto the boxes are broken down by missing pieces,” Bakry explains.

Every five seconds, a new image emerges. Some pictures appear amateur and blurred; others are purposefully blotched by shadows from the boxed skyline. In one image, a bearded face is framed over a Nescafe box, and in another a woman is split by a gap between the cardboard. Below her it reads: “This Side Up.”

“That was the hard part. I had to go around to supermarkets, the huge markets like Carrefour and no one understood why I wanted old boxes. Here in Cairo, it was actually easy to just buy them. But in Gothenburg you had to be there at the right time and the right place before they recycled them,” Bakry says.

Outside the curtained room at Mashrabia Gallery are mounted images from Bakry’s Gothenburg exhibition for sale but not worth the bill. A free postcard by the entrance makes a better souvenir.

At first glance the installation looks like a haphazard stack of used boxes with a random mess of photos overlaid. And at second glance, the fact remains. But if we overlook the artist’s form, one can empathize with his statement on the aftermath of the revolution and the re-emerging protests to date. “A lot of missing pieces needed to be complete again. They made the mistake of dividing, that’s why the results now are terrible. People need to reunite again,” Bakry says.

Check out Mashrabia’s archived works for sale and 2LE postcards from previous exhibitions.

Escaping the heat and demonstrations of Tahrir in a dark, air-conditioned room.

The waste of space for pricey photographs of the Gothenburg installation.