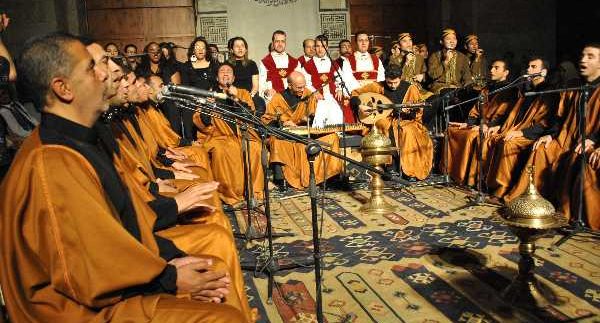 Rarely do we
attend a spiritual performance that leaves the audience with an overwhelming
sense of national pride as seen in Intisar Abdel Fattah’s Peace Message. Performed
regularly at the Ghouri Complex in Islamic Cairo, the show leaves you in a
state of trance with its perfect fusion of Egyptian patriotism and religious
recitation.

Peace Message is
an ensemble of four troupes; Samaa, a Sufi recitation group, a Coptic hymnal
choir, an Indonesian recitation group as well as an a-cappella church choir. Using
only kanoun, daf and drums, the simplicity of the underlying music allows the
singers’ smooth voices to echo through the small dome, sending messages of
unity beyond religious and racial difference into the audience’s soul.

The songs
performed by Peace Message have a strong emphasis on God and his praise. Having
the crowd seated no more than a metre away from the performers, who are settled
a step lower than the first row, ensures that a connection between audience and
performer is maintained. Also adding to the intimacy of the performance is the
presence of the conductor amidst the audience.

As the show
proceeds, the troupes’ harmonious melody takes the crowd through escalating
levels of divine spiritual experience. The fusion of the various styles of
religious recitation and hymns leaves listeners swaying subconsciously to the
rhythm.

This is by no
means an opera-type performance– it’s all about breaking down differential
boundaries, which is also evident in the reference to humanity as opposed to
religion or gender. Adding to the uniqueness of the performance is the crowd,
which includes a diverse mix of ages, ethnicities and religious backgrounds.
There seem to be a few frequent visitors who know the performers personally.

Near the end of
the show, the group sings national songs and members of the audience are encouraged
to sing along. This lends a sense of unity to spectators, who are left with a
feeling community with their neighbours regardless of class, gender, religious
affiliation or sexual orientation, which is arguably the main aim of the
performance.

Peace Message is
essentially a representation of a utopian Egypt in many ways, sending the
message that humanity surpasses all differences. The show is performed every
second and last Sunday of the month at the Ghouri Complex. Entry to the
performance is free and the venue functions on a first-come-first-served basis.

Arrive early to make sure you get one of the front-row seats.

The performance leaves you with an immense sense of unity as you walk out.

If the performance is inside the Khanqah, it can be a little stuffy.