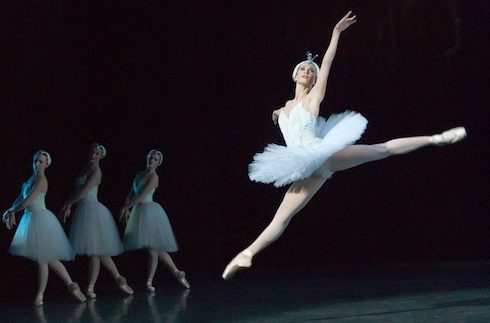 Let’s say you’re a swan. And a charming prince professes his
eternal affections for you, only then to stray with another swan who he swears
– despite having an entirely different complexion – looks just like you. Would
you forgive him?

Since the 1877 production of Peter Illyich Tchaikovky’s Swan
Lake, ballet companies have presented different interpretations of the
classic libretto; from its original happy-ever-after conclusion to a soap-opera
tragedy – usually in the form of a watery grave.

Powdered tutus, a lake for a backdrop and a romantic ending; traditions
were held high at the opening night of Swan Lake at the Cairo Opera
House. In a six-show engagement, under the direction of Abdel Moneim Kamel, the
Cairo Opera Ballet Company staged the four-act ballet more or less true to the
original scenario; employing choreography from an 1895 revival by Marius Petipa
and Lev Ivanov.

In a story inspired by German folktale, archetypes reign in
a hero-damsel-villain trifecta: Odette, a princess cursed by the sorcerer von
Rothbart, transforms into a white cygnet by day. But when the bachelor Prince
Siegfried falls for her feathers, von Rothbart succeeds in a ruse to break the
prince’s oath of devotion by seducing him with Odillia – a black swan
resembling the ill-fated princess. After a decisive battle between good and
evil; the witch dies and true love is victor, the spell is broken and all is forgiven.

Aside from a few opening-night jitters, false steps and a
flying tambourine; the batterie of levitated foot switches – or ‘changements’,
and the quick leaps and turns – or ‘fouettés’, by the cast were impressive.

At the heart of the ballet was the timeless music performed by
the Cairo Opera Orchestra, conducted by Nayer Nagui. Solos on the oboe, clarinet,
harp and violin struck a cord during the ballet’s popular leitmotif, Song of the Swans; while the drum roll and brass carried a majestic and noble overtone.
With full views of the stage and orchestra pit, loge and balcony seats, one can easily
follow the on-and-off-stage ensemble.

Apart from the fancy pirouettes and the awe-inspiring music,
the scenery also merits a ticket. Creative license comes through in the use of a
diaphanous screen, unconventional set design and the superb use of lighting in the final
act – a treat worth discovering.

Keep in mind that tickets are available for purchase only at
the Opera box office. Attire is strictly formal; jackets for men are preferred.
Before curtain call at opening night, a premature drama played out in the main
lobby when security chased and shoved a member of the Cairo Symphony
Orchestra – who was about to attend the show without a tie. But don’t be deterred, the
information desk happily loans them out.

After the 5th April showing, performances of Swan
Lake will be held nightly at the Main Hall from the 8th to 11th
of April 2012.

Make sure to have dinner before because it's a three-hour show.

The colourful stage and art direction.