The Egyptian Museum: An Insider’s Guide 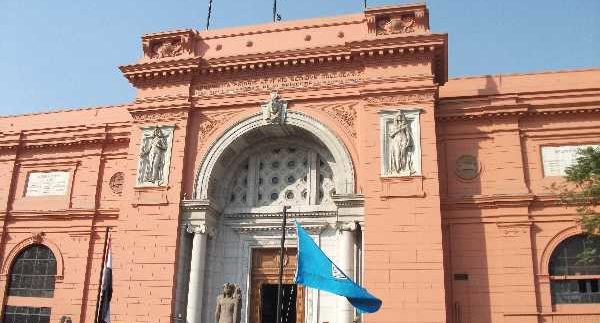 It may not be
the oldest museum exhibiting Egyptian antiquities, but the Egyptian Museum
holds the most: over 150,000 pieces are on display, with an incredible 30,000
more stocked away.

Prepare for queues.
After an initial ID check at the Egyptian Museum’s entrance just off of Tahrir
Square, there is a bag check at the main gates. Once you have acquired your
ticket, there is yet another queue for ticket checks, before you enter through
the museum doors, upon which you are subjected to another electronic sensor. Despite
the museum’s website claims, you are not allowed to bring a camera in under any
circumstances. Upon entering the museum, you will feel like a rogue
archaeologist that has stumbled on a tomb of treasures.

You are
immediately confronted by three routes. Taking a left will start you off on the
chronological route through Egyptian history. Once you’ve figured out the
slightly confusing numbering, room fourteen is a secret little pleasure and a
must-see. Guarded by statues on either side of its entrance, the room is built
like a temple. Steles are used to cover the walls, as a huge, inscribed pillar
seems to hold up the ceiling of the museum itself.

You should
notice a distinct change in the style of art as you walk through the corridors,
ducking and diving into the different rooms along the way. Thousands of years
later on is the Greco-Roman displays. Often lost in the parade of a tourist’s perception
of Egyptian history, these displays are certainly not any less impressive or
relevant. Surprisingly, these sections are scarcely populated by loud tourist
groups.

Straight
ahead from the entrance is the inner court of the main hall. Flanked by various
generic-looking statuettes, the hall is entirely dominated by a huge statue of
Tuthmosis III and his wife Tiye presiding at the back, looking out onto the
entrance. There are signs plastered everywhere asking visitors to refrain from
touching objects; but we defy anyone to see such a huge foot and not feel
compelled to grab the toe.

Just beyond
this huge monument is one of the more modern and innovative displays. Two statues,
slightly bigger than real-life size, have been recreated from ruins and pieces.
Not all the pieces have been retrieved, though; so they are suspended apart
from each other to their exact position, floating as they do. Unlike the big
toe, you should definitely not touch the pieces or– as tempting as it maybe– wave your hands
through the gaps.

Like
something out of a particularly gruesome episode of CSI, the Royal Mummy Room is not for the fainthearted. Encased in
glass are the mummies of various kings and queens, their bodies preserved
miraculously, first in their tombs and now in the museum. This section is like
no other in the museum, and lives up to its moniker as the Royal Mummy Rooms.
The very specific chilled temperature and delicate lighting are as atmospheric
as they are necessary to the preservation. The features on the mummy’s faces
are as identifiable and distinctive as your own. The labels here are great too,
giving information on suspected cause of death and age based on DNA testing.

If
mummification is your thing, then the animal mummy exhibit should not be
missed. Tucked away on the second floor, the exhibit is as well informed as any
other part of the museum. In one display case, the preserved remains of a four-foot
fish is only bested by the two twelve-foot crocodile mummies above and beside
it. Mummified baboons, cats and jackals are all here, and all correspond to a
particular god. It isn’t quite on the level of eeriness as the Royal Mummy Rooms,
but it’s a very novel display.

Towards the
back of the upper level are the famous treasures of King Tutankhamen. This
section is of course a huge crowd puller, and there’s no alternative but to
brave the queues. The room is dimly lit to help preserve the artefacts. People
are understandably like moths to a flame when it comes to the pharaoh’s mask; it is, after all, made of
pure gold. Tut’s jewellery and regalia are just as impressive. The detail in
his pendants, sceptres or even headrests is just as measured and equally breathtaking.

Located on
the top floor along the corridor left of the balcony view, desolate rooms have
gathered dust, and not the good archaeological kind. Apart from the occasional
art student sprawled across the floor with their new pack of colouring pencils,
these spaces are virtually deserted. Inside, you will find figurines of all
sizes called shabtis. These represent servants, and were placed in tombs to
serve their master in the afterlife. When you stand in front of hundreds of
these shabtis, each one of them noticeably different, you may forgive the
museum for its shortcomings. Over and over again, you’ll find yourself staring
intently at something that you have no idea about; except that it’s pretty
special.

While King
Tut’s treasures draws in the crowds; look beyond the glitz and glamour and
delve into the lesser known but equally remarkable artistry. Objects become
artefacts when they are given a quality and story: these are the stories that
help you suspend your disbelief and engross you a little more into the museum
experience.

The museum is open every day from 9AM to 6.45PM. Entrance fees cost 2LE for Egyptians and 40LE for foreigners. Entrance to the Royal Mummy Rooms will set you back an extra 10LE as an Egyptian and a steep 70LE for foreigners; but it is undoubtedly worth it. There’s a suitably demure gift shop by the entrance, but you are more likely to find better prices outside the grounds around Tahrir Square.

Unfortunately, it seems that the museum itself does little to help you along the way here: too many of the labels are outdated, while some displays have no labels whatsoever. So without a guide leading the way; you are at your own device.