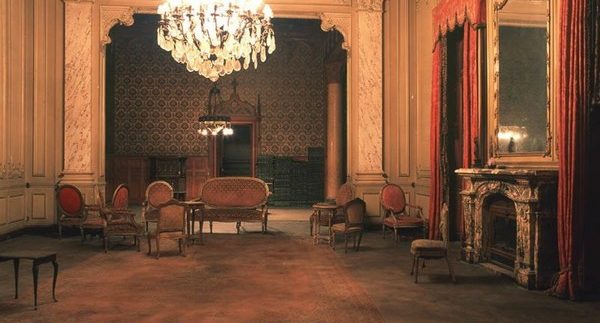 What
started off as a healthy interest in Egypt eventually led Russian born Xenia
Nikolskaya to Cairo where she became obsessed with all the city’s abandoned
palaces and mansions.  During her explorations
around these empty buildings, she always had her camera right by her side, and
that is how her ‘Dust’ was born. The photography exhibition is located on the
first floor of Townhouse Gallery in Downtown Cairo and carries pictures from
abandoned buildings from all over the country.

Nikolskaya’s
inspiration began when she entered the Serageldin Palace in Garden City and
that is perhaps why it is the focus of most pictures. The Serageldin Palace is
one of the few buildings that wasn’t confiscated by the government in the 50s
and turned into a school. In many of the photographs we see former palaces that
now have chalkboards clipped onto 19th century wallpaper. There are
pictures of staircases that used to have great splendour but are now falling
apart.

Nikolskaya
didn’t just visit palaces though; there are also photographs of other key sites
around town. Very interesting is her work in Downtown’s Radio Cinema. The
theatre has recently been restored to its former glory and through Nikolskaya’s
two-year old photographs, you can see why this was necessary. The best photograph
is perhaps one that shows a dressing room. The lights around the vanity mirror
don’t work anymore and there is an empty chair; one can imagine that many an artist
and actor once rested on it before heading to the stage.

Another
interesting picture is that of the Tiring Building in Ataba. What used to be
one of Cairo’s most glorious department complexes is now falling apart and
covered in dust. The images of the Sakakini Palace are also striking; it shows that
the structure is still in good state and can perhaps be saved from further
neglect and deterioration.

Apart
from Cairo, Nikolskaya has also travelled to Minya, Alexandria and Esna. The
photographs from these towns centre mostly on images of former hotels.

While
the images overall are interesting, there is something missing from the whole
exhibition. Though all the venue’s names are mentioned next to each shot, there
is no background information which is a bit of a shame considering that
Nikolskaya has published a book featuring these photos.

Nikolskaya
has captured Cairo’s iconic buildings and has quite literally photographed the
emptiness found in them; but this sad aspect of the photographs gives the
exhibition depth.

It's about time someone paid attention to all these beautiful buildings.

A bit more info would have been appreciated