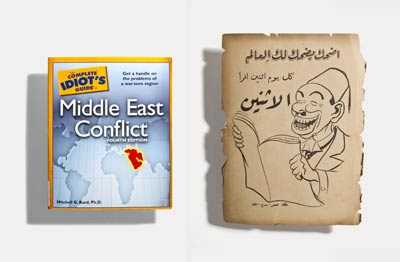 On October 12th,
2010 Townhouse Gallery launched its first exhibition following its summer
hiatus, and we couldn’t be more excited! As Townhouse is one of the leading
independent art spaces in Cairo,
the exhibits never fail to impress, immerse and inspire those that have the
opportunity to get involved. This latest project is no exception. The visiting
exhibition Bidoun Library is held on the first floor of the Townhouse
building; so head down to Nabrawy
Street; the gallery is located up the stairs and
to the left.

The Bidoun
Library has been archiving and teaming with collaborators since its first
installation in Abu Dhabi
three years ago. It is an offshoot project of the leading arts and culture
publication of the Middle East, Bidoun Magazine. If you’re not familiar
with Bidoun Magazine; now is your time!

Since 2008,
the Bidoun Library has partnered with art collectives worldwide, including a
Lebanese comic’s journal and its latest stop in New York City. Unlike any other exhibition in
recent months or even years; the exhibition’s simple focal point is paired with
a rich history and philosophical questioning focused on the book as an object
of expression.

As many of
us know, the value of the written word has become increasingly reduced in
recent times. Focusing on the 20th century, the library explores that period when
written word, including the book, newspaper and periodical magazine, was in its
most tangible form of circulation. The exhibit’s collection of written word
draws from printed matter from around and within the Middle
East, including exhibition catalogues, artists’ books and other
printed materials. Viewing the book as a means of material production, the
concept stems from some of the very first publishing projects that took place
during the Cold War; where the written word meets image.

The Bidoun
Library covers the entire first floor, including the front room that is
lined with the autumn 2010 issue of the Bidoun Magazine titled ‘Library.’
This issue displays a catalogue depicting the latest Bidoun exhibition held in
the USA.

Attached to each issue’s cover are one-of-a-kind photographs
accumulated by local collector Amgad Naguib. Four different hardback books are suspended
from the ceiling by silver chains in the middle of the room, representing
varying portrayals of how the Middle East has
come to be defined through literature.

In the two
middle rooms, shelves are stacked with rows of books, providing the viewer with
both a live art experience and a true understanding of the exhibit as it plays
out in individual viewers’ actions: books are thumbed through and read out loud
by visitors. It compels you to explore and research the materials at hand, most
of which are rarely available for commercial sale.

The majority
of material located in the room to the right offers a great selection by and
for artists, including a copy of the inspiring Art is for the People.
Take a seat at one of the long tables and read as long as your heart desires.
Lastly, check out the video installation in the back, which conjures up more speculation
through the use of musical media.

The Bidoun
Library is a collection of books based on a clear vision. While the library
itself is an organised institution that collects the written word for archiving
and experiencing the depths that these printed materials came from, the
exhibit portrays how they are used and understood today.

Showing
until November 17th, the exhibition’s hours are Saturday to Wednesday from 10AM
to 2PM and 6PM to 9PM, and Fridays from 6PM to 9PM.

Grab a cup of coffee and go in the morning; the space’s sunlight is relaxing and you’ll get into the reading groove in no time.

The library provides us with many reading materials that are not otherwise available.

Since nearly the entire exhibition is of books, you might need more time than expected to browse.