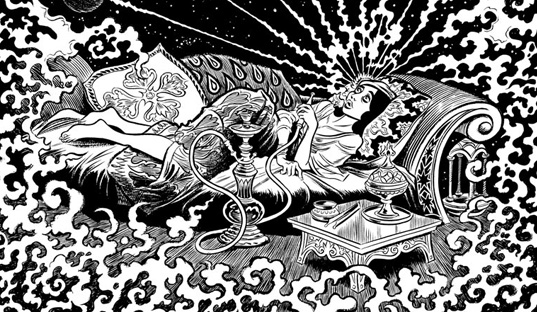 Habibi by Craig Thompson is a graphic novel that follows main characters, Dodola and Zam – two escaped child slaves – through a whirlwind of events that are all frightening, enduring and ultimately life-shaping. The 672-page novel may look overwhelming from the outside, but in fact, the read is quick and can easily be finished in a few hours.

The premise of the book is based on a nine-squared grid holding nine different letters, which in some way represent all of life – or at least all that matters in life. Every chapter refers to one of those letters, linking different stories that relate to it. For example, beginning with the letter ‘B’ in Arabic – which stands for ‘Bismillah’ – the story of Zam and his newfound caretaker, Dodola, begins and the story is constantly referring back to this word.

The structure of the book is difficult to map out. While the story is chronological in the bigger sense, events tend to jump back and forth, where each child slave’s full story is only revealed the further you read. We do not know exactly how either of them came to be until to the end.

Other distractions from the story line are religious references. Using Biblical references, verses from the Quran and the history of Moses and Adam, Thompson uses mythical tales to reflect on the characters at hand and the trials they face. He even has a character and element that bears an uncanny representation of Noah and his arc.

Apart from his use of history and religious fables, Thompson also tells a very aggressive, and often times, dark story.  Dodola is married off as a child and upon turning to prostitution is subjected to rape and mistreatment. Zam is a slave who sacrifices his manhood out of a loss of a better life. They are both abused time and time again and having their misfortunes sketched out for the eye to witness adds a shocking element to the novel.

This brings us to what makes the novel so wonderful at the same time; the illustrations. The detailing of the sketches and the exemplary hand-work at play is extremely commendable. Action scenes have your eyes rushing through the pages as frantically as one seen on a TV screen. The beauty in the details is endless; the graphics are looming and grand but also sensual and precise. There is a lot of calligraphy incorporated, which makes for an interesting experience for those who can read Arabic.

Another interesting aspect is his combination of the new and the old. Though the story takes place in today’s world, a lot of the prevalent ideologies are from nomadic times; primitive and beastly.

There is also some humour to be found in Habibi. When Dodola tells the version of the Noah’s Ark story in which he leaves his wife behind, we are given an image of Noah sitting  on his bed with a thought bubble filled with his grumblings: ‘Who needs her? … Bitch… Battle-axe … Ball and chain’. Thompson not only takes these moments to humanise past prophets, but he also gives them a contemporary voice. There is also a powerful underlying sarcasm throughout.

There is indeed something quite poetic about the story he tells – and the manner in which it is told – regardless of the gruesome, harsh aspects; on the contrary, it is these parts that make the novel that much more meaningful.