Cracking the Code of the Egyptian Relationshit

Imz Khattab: Cracking the Code of the Egyptian Relationshit 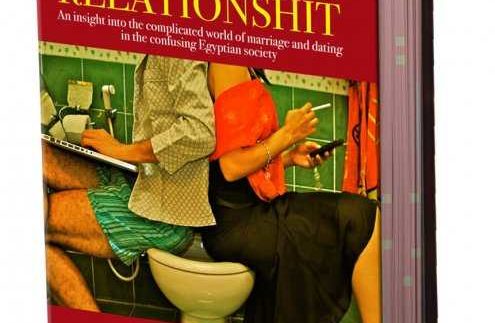 If you’ve ever read an issue of Cosmopolitan or any other women’s
magazine, then you would be wasting your hard-earned Egyptian Pounds (all 80 of
them) on this book. Meant as a guide for Egyptian men and women to understand
what goes wrong in relationships and how to fix them; this book is just another
replica of all the self-help relationship books. It’s marketed under the
disguise of targeting Egyptians, when in fact; most of the tips can apply to
anyone worldwide.

Cracking the Code of the Egyptian Relationshit (no, that’s not a typo) is divided into
20 sections; ten sections about ’The Convicts‘: men’s worst personality types
and how to avoid them, and the other ten are about ’The Sinners’: annoying
habits that women have and how to fix them to become more desirable to men.
These sections are divided into several subsections about how to deal with the
person, danger signs, how to get out of the relationship and the ’scientific
and psychological explanation‘ section, which was a failed attempt at giving
the book a smart spin.

The advice in the book can easily be devised by common sense, and adding
’Egyptian‘ to the title is misleading since the book doesn’t give specific
advice pertaining to being Egyptian; except for one section where the Egyptian/Western identity crisis is discussed. Khattab makes sure to try to Egyptianise
the content by using local examples such as ’vacationing in Sharm‘ and using
the names of local hang-outs to make the content more appealing to the readers.


The ‘scientific/psychological explanation’ sections are the book’s biggest flaw. The author claims to have conducted research and used scientific
studies to back up her arguments– most of which are scientifically false; according to an MD and a psychologist that this reviewer referred to. Moreover, no studies or sources
were cited anywhere in the book to back up the author’s claims.

For example, in one of the sections, the author
talks about how a couple is usually head over heels for each other before they
get married, but shortly after they tie the knot, the flame burns out. Khattab
claims that according to scientific studies, the hormones dopamine and oxytocin
are the ones responsible for this behavior, when in fact, oxyticin is released
in females after they give birth. A few inconclusive studies have attempted to establish a relationship between the hormone and relationships (orgasm, love, etc); and so it’s sometimes referred to as the cuddle hormone, but none of
these studies are official or conclusive.

In a section that discusses guys who marry girls for their money, the author wrote
that when she was ‘researching’ this section, ‘I googled ‘men
who are gold diggers’ and that the search only yielded results for female
gold diggers […]’. The author came to the conclusion that male gold diggers only
exist in Egypt, since, you know, google said so.

You can easily read Cracking the Code in less than two hours. The book is written in a chitchat conversational style full of grammatical
errors that would keep Queen Elizabeth up at night. A lot of Arabic words and
phrases are used within the text, with footnotes of the literal English translation
or the general meaning.

Released in January 2010, the book is available in most
major bookstores; Diwan, Virgin, Alef and Bookspot.

Why Men Marry Bitches, Men are from Mars, Women are from Venus, He’s Just Not That Into You

Imz Khattab is a graduate of the American University in Cairo, with a BA in Integrated Marketing Communications. A former editor and writer for Campus Magazine, this is her first book.

Where to Get Outfits That Scream Hot Girl Summer

What Do Egyptians Have Against Umbrellas?