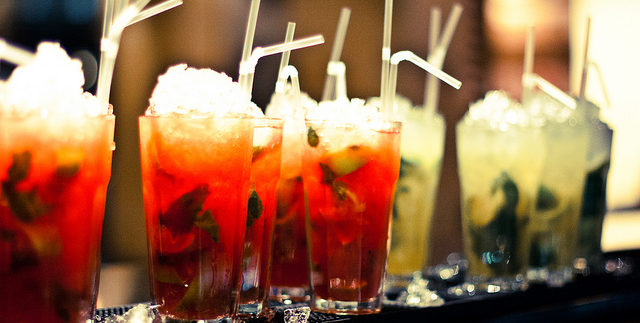 Located on the first floor of the Ramses Hilton Center, Rendez-Vous, an elegant open area café simply oozes with class.  It has become exceedingly popular amongst higher class guests, including many Internationals which arrive from the Ramses Hilton right across the street. Equipped with a large flat screen television, air-conditioning and a thrilling 360 degree view of Ramses Hilton Center’s shops.

Divided into two areas, the main area was for food and the far side for shisha and a small zalabya vendor. The two aromas mixed together quite nicely.

Upon seating ourselves we were presented with two stylish brown leather menus, a large one for the food and smaller one for the drinks.  The drinks menu specializes in mostly alcoholic beverages; a mixture of aperitifs, cocktails and beers, with one Heineken costing (39LE).

We ordered one Pina Colada at (71LE) which tasted identical to any Pina Colada served at a bar, one Cappuccino at (23LE), which although quite strong, the staff had carefully drizzled the word ‘Welcome’ in chocolate sauce on its frothy surface – which we found a nice touch.

Finally, we decided to try one of Rendez-Vous’s mocktails. Similar to a cocktail minus the alcohol, we opted for one Raspberry Mojito (32LE). Sweet with the thick consistency of a fruit smoothie, and mixed with the strong bitterness of lemon juice and soda water, the Mojito was refreshing.

Also available in the menu are soft drinks, but at excruciatingly high prices reaching 26LE for a can of coke.

The food served here is well presented and divided into salads, desserts, an Egyptian corner and an Italian corner, from which we decided to try the Vegetarian Pizza at (42LE), a decent price for a whole pizza which was crispy and brown around the edges with a moist cheesy centre topped with a generous layer of colourful vegetables including broccoli, peppers and mushrooms – a real burst of vegetable flavour.

We also opted for one serving of koshary from the Egyptian corner. Served on a white circular plate and moulded into a delicate mountain of pasta, rice, lentils and onions. Although presented nicely, the flavour was pretty much the same as any koshary vendor on the street. The only difference is here it’s more expensive.

The waiter who served us was an absolute delight too with exceptional protocol, a smart uniform and spoke both English and Arabic.  Being situated in a mall is perfect for those who wish to engage in a little shopping or go the cinema on the top floor.

Rendez-Vous offers a fabulous high class service to all its guests.