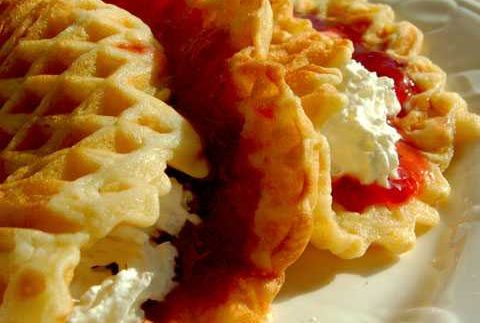 Cairo’s Zamalek area seems to be fertile ground
for everything sweet, with a continuous stream of new pastry and sweet shops
popping up all over the island. Treats is the new kid on the block that hopes
to bring European-style waffles and crêpes to Cairo in an authentic and high quality way. We would venture to say that it’s a job well
done.   Offering sweet and savoury crêpe
varieties and waffles from crazy to classic, this hole-in-the-wall on Brazil Street might
just become your new favourite stops to soothe your late-night hankerings.

Craving a classic
French crêpe, we sampled one with banana, Nutella and kiwi, and were quite impressed
with the tasty combination– flavourful, satisfying and not too sweet. We were curious
about the waffles too, and the clerk kindly agreed to mix us a variety of
flavours, from maple syrup and peanut butter to cinnamon and marshmallow, and
apart from varying sweetness; they all made for a nice treat. The waffle dough
itself is very well executed in Norwegian style– thin, airy and lightly
flavoured; leaving room for the toppings to take over.

‘Original’ waffles
are for 20LE and feature classic toppings like Nutella, peanut butter and
strawberries. ‘Inspired’ waffles are for 25LE and come in tantalising varieties
like apple pie, banoffee (the popular British dessert of banana and toffee pie)
and rocky road. Crêpes too can be chosen in pre-picked combinations like apple
toffee and toffifi, or you can create your own at three price points: 15LE, 20LE,
and 25LE for one with ice cream.

Savoury crêpes
are a nice surprise and a good light lunch option. Fillings include tomatoes, oregano and feta, as
well as mint, beef and pineapple from 20LE to 25LE. Stand-outs are the Brazillian (25LE), hot dog
(25LE), and veggie delight (20LE).

The boys behind
the counter are young and eager, and the décor is sparse but modern and
colourful, with bright images of what they have to offer on their simple
menu. There’s not much room to sit at
their small counter, and getting in and out of their tall stools may be a bit
tricky for the vertically challenged, but the whole idea is geared towards
being a quick stop to grab a light bite while on your way.

You could have both lunch and dessert for 40LE.