Due Date: Two Guys on a Road Trip 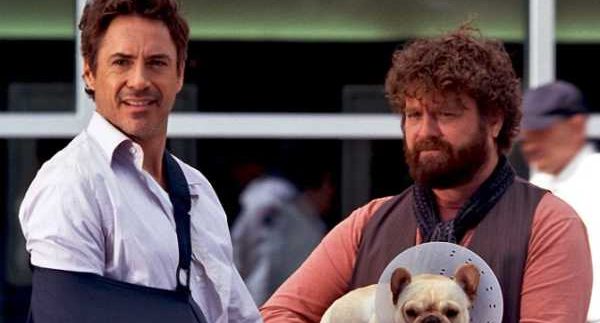 Before Judd Apatow changed the landscape of comedy with romps led by
lovable man-children, director Todd Phillips was the undisputed king of comedy.
During the first half of the 2000s, films like Road Trip, Old School and
Starsky & Hutch ruled the box
office. While Apatow found success exposing the softer side of male vulnerability,
Phillips presented a less apologetic version of prolonged male adolescence. This
partially explains the surprising success of 2008’s The Hangover, a film that bought back the frat-pack humour to male-centric
comedies.

In Due Date, Phillips brings
back his newest muse (the breakout star of The
Hangover), Galifianakis, the perfect comedian to carry his character’s loose
cannon sensibilities. Galifianakis is a performer that can disarm the most
offensives, misogynistic and inconsiderate of jokes, and turn it into a well-intended
quip. However, as strong and funny as Galifianakis’ persona is, it needs to be planted in deadpan so that its
bizarreness can pop; and that’s why paring him with the slick Downey Jr. is an
ingenious casting move.

Right off the bat, Ethan Trembley (Galifianakis) gets Peter Highman (Downey)
into trouble. He casually chit-chats with him about terrorists and bombs right
before their plane to Los Angeles takes off, and as a result; they both get
kicked out and added to the no-fly list. Peter becomes visibly stressed: his
wife is giving birth to their first child, and not only is he forbidden from
flying; but his wallet with all his cash and identification, is on the plane half-way
to LA. Peter is left with no other option but to join Ethan on a
cross-country road trip and suffer his nonstop chatter and absurd questions.

Due Date sticks to the
road-trip formula and invests all its energy in the jokes. The dialogue is
snappy and ridiculous, and Galifianakis keeps throwing one off-kilter nugget
after the other. Downey plays the straight man to Galifianakis’ clown; but his
character has a stronger backbone than a typical yes-man. At times, he’s a
sounding board for Galifianakis; but at others, he bursts in alarming rage to
offset the silliness, giving Due Date
a balancing sense of urgency.

Not quite the laugh riot like The
Hangover, Due Date is an
extremely enjoyable and hilarious film, where the stakes are continually raised
and the complications ensue at a dangerous rate. The film also gives the two
leads charming moments together, where they get to learn more about each other.
Due Date is a nice dramatic touch in between
the non-stop laughter.

Galifianakis and Phillips are currently shooting the sequel to The Hangover in Thailand. The film reputedly boasts a cameo by former US president Bill Clinton.