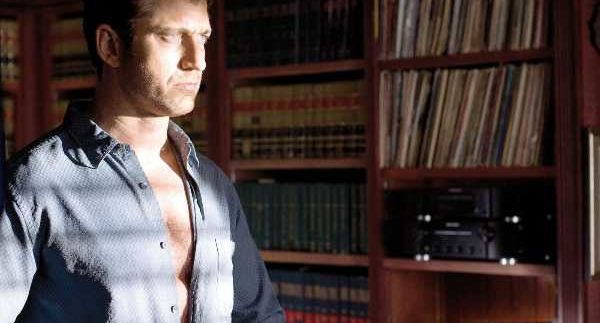 Butler is a solid action
hero. He lives on the same planet as Jason Statham, where the air is mostly
composed of oxygen and testosterone. Unlike the latter, Butler’s refusal to embrace his own machismo
has prevented him from hitting his stride. It’s not that he’s not a gifted
dramatic actor; he is. It’s just that there are only very few that can take a
film dumber than an 80s video game and sell it well. Alas, in Law Abiding Citizen, Butler tries to have it both ways: make a
pumping action film, and inject it with pseudo moralising. The result is a fun
but very idiotic film.

What is it with thugs just killing families and leaving behind an angry
father hell bent on revenge? Are they that desperate for stimulation or just
suicidal? Clyde ( Butler )
finds himself the victim of such a monstrosity, and after being betrayed by the
American judicial system– personified here by DA Nick Rice (Foxx) – he spends
the next ten years planning his Saw-like
revenge, not only against the killers who massacred his family; but against the
very system that let them get away with it.

When Clyde starts executing his master plan, all the players start falling down
like domino pieces; leading to a showdown between him and Rice. At first,
the plan seems ingenious and plausible, but the film’s insistence on
shoehorning a realistic setting and seemingly profound morals is distracting.
You can’t give Saw a gritty veneer
and expect it to pass as a cautionary tale; even if you have the talents of
Oscar winner Foxx at your disposal. Yes, Nick’s torment is real, and he’s just
a reflection of Clyde that happens to exist on
the right side of the law; but Foxx downplays his part, presumably out of
embarrassment.

What we end up with is the smartest dumb film
of the year. Technically, the film is solid: the action is gripping, the pace moves
fast enough to wash down the bitter taste of its misguided audacity, and Butler ’s wrath is so
much fun to watch, even if everything else will leave you rolling your eyes. Law Abiding Citizen is the kind of film
that is very easy to get into, and although it’s easy to write off; it’s
actually fun to watch.

RocknRolla, Inside Man, Man on Fire

When we say Butler made this film; we really mean it. He and his production company made the film, and he personally picked the script and helped developing it.