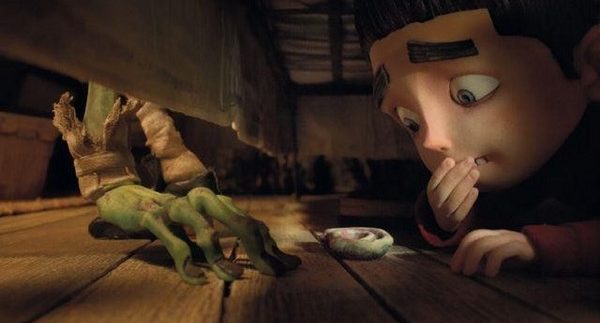 Norman is a strange little fellow. He can see dead people; a trait which hasn’t exactly endeared him to his classmates. When his homeless, estranged, similarly blighted uncle dies, it falls to him to stop a centuries-old witch’s curse from reanimating the corpses of the seven people who accused her of witchcraft and had her executed. Norman, aided by a group of mostly unwilling tagalongs, battles zombies, ghosts, his dad and the ignorant, trigger-happy townspeople to save his hometown.
ParaNorman is just plain fun. It riffs on horror films to create something that both mocks and celebrates a deep love for them. The combination of the purples and greens and the fonts used give off an awesome pulpy vibe; like those really kitschy old horror films – the zombies, for example, wouldn’t have been out of place in Michael Jackson’s Thriller video and the title sequence and end credits are a thing of beauty. The former sets the tone perfectly while the latter is almost as much fun as the film itself and definitely worth sticking around for.
Since ParaNorman comes from the same studio that gave us Coraline, we expected something wonderful and in general, it is. While both films are centred on misunderstood kids and are whimsical but creepy, Coraline is genuinely disturbing while ParaNorman goes for a funnier vibe, similar to the sense of humour of films such as Shaun of the Dead and Zombieland. But while Coraline was a genuine masterpiece there’s something ever so slightly off about ParaNorman; something you probably wouldn’t even notice unless you – like us – went in with sky high expectations. The thing is that the characters occasionally look slightly wooden – as in expressionless not a tree by-product – especially during some of the secondary characters’ close ups. While this only affects very few shots, it is noticeable especially in comparison to the rest of the film which looks truly incredible.

The story is pleasantly surprising and definitely not as straightforward as you’d expect. It doesn’t have a clear cut villain and this ambiguity provides for some of the film’s most hilarious scenes. One minute the zombies are shuffling towards town, the next they’re frozen and cowering at the sight of the chaos that we call everyday life. The twists keep coming, both minor and major, right till the end and the film is both really funny and emotionally engaging – you’ll be surprised by how strongly you’ll be rooting for Norman.

It’s not only the visuals and story that are incredible though; the voice work is also pretty fantastic. Anna plays Norman’s blonde, guy-obsessed, cheerleader sister Courtney and makes her a source of constant laughs. Mintz-Plasse, better known as McLovin, plays against type as a burly bully with crap for brains named Alvin and is wonderful at it. The rest of the voice cast, which includes people like Casey Affleck and Leslie Mann, just rounds out the awesomeness. This is also one of those rare animated films where actors whose voices are quite recognisable, completely inhabit their characters and let their personas fade into the background.

Suffice it to say, ParaNorman is a ton of fun and definitely worth seeing. It would’ve been especially awesome around Halloween, though.