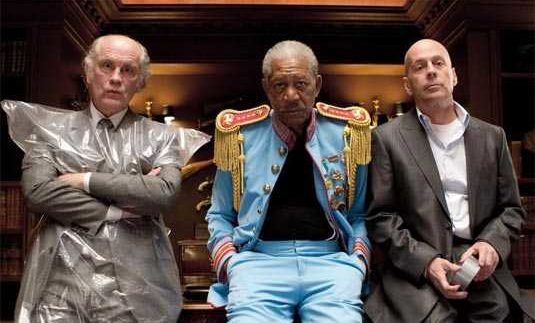 A good
action film has cool action sequences, a fitting score and soundtrack, a little
humour and even a dash of romance thrown onto the silver screen. The quality of
the acting is seldom called into question, because let’s face it: how hard is
it to act like a badass? The plot is also secondary, and quite frankly, it’s
just an excuse to have more action sequences– but an action film with a good
plot becomes an instant classic. Red may
not become an instant classic; but it’s certainly one hell of an action film.

The film’s plot,
while formulaic and paint-by numbers spy-thriller material, is a watered down
version of the film’s comic book origins. The darker, more serious tone of the
comic book mini-series published by DC comics is lightened for the Hollywood audience, replacing a crimson-hued quest for
revenge with a good natured I-only-kill-bad-people search for the ugly truth.
Still, there are enough developments and even a plot twist to make it more than
just a pretty face.

The action
sequences are also light on the special effects, and with the exception of a
testosterone-soaked office brawl, it goes for finesse where other action films would
opt for over-the-top explosions and cracking bones. All very mature stuff,
really. Even the score underpins the general positivity of the film very well,
transitioning seamlessly into tense Mexican standoffs and kidnapping scenes,
then back again.

So, judging
by the above, it’s a pretty decent action film– but there’s a hook: Red stands for Retired and Extremely
Dangerous; a moniker that applies (loosely) to the main players in the film.
Count them off: Bruce Willis is the main protagonist, a retired CIA black ops
agent, Morgan Freeman as his mentor from back in the day, Helen Mirren is a
retired MI6 agent itching to get back into the game, while John Malkovich has
fun playing the paranoid but extremely deadly conspiracy theorist, which is reminiscent
of his ex-CIA would-be assassin character from In the line of Fire but more alive and slightly senile. Rounding it
off is Richard Dreyfuss as a shady arms dealer.

The youth in this film is
represented by a middle-aged Mary Louise Parker as Willis’ love interest and
reluctant participator, and Karl Urban as the zealous active CIA agent tasked
with putting Bruce Willis in the meat locker for good.

Ah, the
intrigue deepens; the interest intensifies as it rightly should. Remember,
though; you’re not going to watch a modern Towering
Inferno or even a Mission Impossible-type action film– this is
more like Ocean’s 13, but with the
CIA and less attractive actors. Ok, so it’s nothing like that either; but it’s
still one hell of a fun film.

The A-Team, The Losers, MacGruber

Brian Cox and Helen Mirren play a Russian and British spy, respectively. In real life, their ancestry is reversed: Brian Cox is British and Mirren, though born in England, has Russian ancestry.