Sameer, Shaheer and Baheer: A Trip Back To The Vibrant Seventies 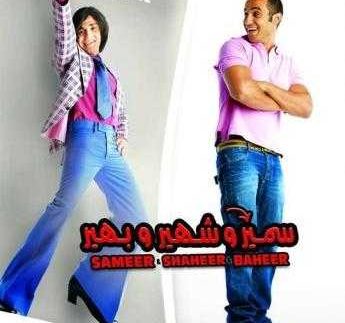 Part-time-travelling story,
part-zany comedy; Sameer Shaheer and Baheer
plays by the rules of both film conventions. It has the obligatory weird scientist,
a trio of fun twenty-somethings that are in tune with all the latest catch
phrases, and a colourful backdrop (the wild seventies), where funny mishaps lie
around every corner. As comedy concepts go, the film gets a solid ten.

Once upon a time, three
brothers shared the same birth date but were not triplets. Each comes from a
different mother. Sameer (Fahmy) is a suicidal stuntman whose mantra is ‘Ahmed El Sakka is the greatest
thing since sliced bread’. Shaheer (Chico) is an overweight chick-magnet with
musical aspirations. And Baheer (Maged) is a spoiled mommy’s boy that harbours
a curious fascination for boxer shorts. There is no love lost between the three
brothers; none of them would like to be around the others.

As a result
of an uncomplicated series of events, the trio are sent back to the hippie
decade; just a few days before their birth date; a day on which their father
ended up marrying three women and conceiving with each of them. To ensure their
existence, the three brothers must put their difference aside and unite to-
and this where it gets a little bit icky- make sure their father and respective mothers
hook up.

Early on, the film begins
to suffer from both visual and comedic fatigue. The film starts off fast and
energetically, but fails to build up from there. Lively jokes fall flat due to
static and unexciting composition, a plague infesting the film’s snappy
90-minute running time. Even though the film has tapped some intriguing ideas,
few of them click.

Fahmy, Chico and Maged have always found themselves
comfortable in front of the camera, an asset that plays to their advantage.
Their chemistry is undeniable and ecstatic, and the same can be said about
their turn in Sameer Shaeier and Baheer. The rest of the cast also flaunt comedic swagger,
especially young Amy Samir Ghanem, who plays a hilariously promiscuous up-and-coming
actress and one of the three mothers.

It’s nothing short of
refreshing to watch ensemble and concept-driven films in the exclusive raceway
of Egyptian cinema. Buried within Sameer
Shaeier and Baheer is a novel film that could have been another triumph for
talent over hackneyed star vehicles. Maybe it will succeed next time; but for
now here is another mildly entertaining romp that’s good enough to show
promise, but not to fulfil it.

Action star Ahmed El Sakka makes a cameo appearance as himself early on during the film, proving how good of a sport he is.