The Expendables: A Shot of Testosterone 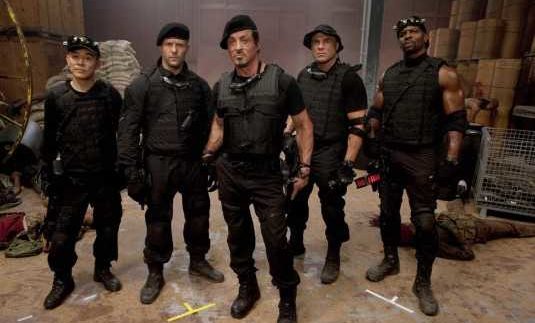 The Expendables delivers the (explosive) goods; every last
dumb one of them. If you’re a functioning male with red hot blood pumping
through your veins; then this film should satisfy your action appetite. Girls
get shoes, Twilight and Sex and the City; boys get Sly Stallone.
Fair enough.

Story, acting,
and all that hoopla is beside the point when you have action alumni like Statham,
Rourke, Jet Li, and the master of bad assery, Eric Roberts himself. All of them
doing one thing, and one thing only: kicking royal ass. Not to mention the
world’s worst-kept secret at this point: the Bruce Willis and Arnold
Schwarzenegger cameo. The film features many more pumped action stars; their
names alone could fill a decent review by themselves.

Barney Ross
(Stallone) is the leader of an elite mercenary team called the Expendables. We
know that they are elite because the film opens with them rescuing hostages
from Somali pirates. They get the job done, but not before killing and blowing
up every last single one of the pirates. Bodies explode like balloons filled
with thick red goo. Hooray for violence!

One of the refreshing aspects about the film– and one of the main
reasons why it has resonated so well– is the old-school special effects and
human stunts on display. Sure, the blood squirts are obviously CGI, but the
hand-to-hand combat, the delicious fire flames or the deep manly voice of Stallone are clearly not. These
elements are all very real and very fun to watch.

The film is a B-movie all the way through. That means the directing is
sloppy and the script is just an excuse for gruesome violence to take place.
And unlike other action efforts this summer (Losers, A-Team), The Expendables doesn’t turn around and wink its eye
at the absurdity. In true 80s action spirit, the film is very earnest and takes
itself dead seriously.

There are some parts mid-film that drag a little, specifically those
intended to motivate or offer any kind of explanation, but all that is discarded as the film gets closer to the
end and delivers a 20-minute climactic action sequence built entirely around bullets
and roaring explosions. Let the bodies hit the floor.

One step short from being the ultimate action hero's dream team, Jean-Claude Van Damme turned down a role sighting his character's lack of substance, which is much like his entire film career.