Zamalek Residence Cairo: Escapism in the Heart of the City 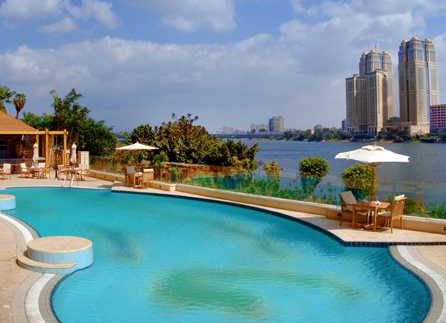 Cushioned, wooden
lounge chairs, nautical striped towels, a kidney-shaped pool and the view of
the Nile – idyllic? Just about.

The recently
renovated Zamalek Residence Cairo, most commonly known and referred to as the Safir Hotel, is the perfect place to unwind after a hectic
week stuck in the city with no beach in sight. Granted, the pool is small and warm – surprisingly – but it still does
the trick and gives one the illusion that they’ve been away on vacation without
ever leaving town.

At 150LE for a
day’s use (up from 100LE just a few months ago) it’s one of the more moderate
options in the city, and you can swim to your hearts’ content from 9AM until
sunset.   Just go up to the Health Centre
on the Mezzanine, where they’ll take your payment then escort you down to the
pool, give you some towels and set up your chaise-lounges.   The rest of the day is up to you.

As mentioned, the
pool isn’t very large, nor is it deep; but it usually isn’t busy either and
does make for a nice dip and a relaxing unwind. The pool feels very exclusive, especially in the evening when there are
fewer people competing for their place in the sun.

Speaking of sun,
keep in mind the Safir is quite a tall structure, as are many of the
neighbouring buildings; so the sun makes its appearance in the morning, then
leaves after about 2PM.   If you want a
golden tan; go early. If you’re escaping the heat, visit in the afternoon to
catch a nice soothing breeze off the Nile.

As for food, you
can order from the hotel’s café, the Nile Breeze; but there’s an annoying 100LE-minimum
charge and the food is pricey; so no light snacking here. More substantial options on offer include breakfast,
soups, sandwiches, starters, mains and desserts. We ordered the pan-fried, marinated duck
breast with cauliflower hash, sautéed spinach, cinnamon-poached apples, and
orange sauce (79LE), which was disappointingly average.

The duck breast was
good but gamey and came with lots of fatty skin. The sauce was delicious but
the cauliflower hash tasted odd and very peppery.   We also tried the baked American cheesecake
with vanilla sauce and seasonal fruits (32LE), which was less than fresh and bore
a heavily buttered crust that was just too much.

The service is
courteous but slow and information is fuzzy – calling before we went gleaned
different information than when we inquired in person. The chaise-lounges are slightly hard and the
change rooms (equipped with two showers, lockers, and three toilets) are not up
to par with the hotel’s four-star status, which will soon become five-stars; Safir
has signed a management deal with Hilton, expected to begin sometime in October
2010.

In the evenings,
the lights come up and there’s live oriental music that makes for a beautiful
atmosphere and a Nile view.   The deck is open until 1AM, with music playing
until 12AM.

A day-use is valid all day, so you could soak up the sun in the morning, go out for lunch and come back for an evening swim to make the most of it.

The small but scenic pool overlooks the Nile in nice surrounding, and as far as pools in the Capital go, Safir offers great value for money.

What sounds like a good deal quickly adds up: expect to pay 500LE-minimum for two people, with food.