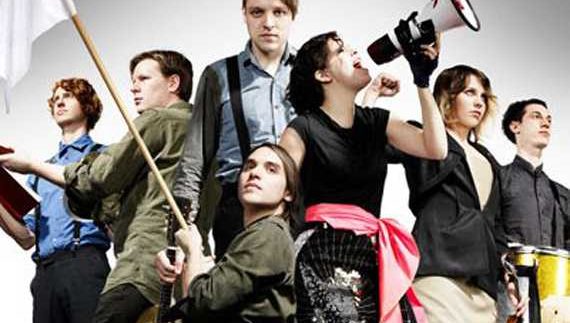 Holding his
ground while the entire world around him is changing swiftly, Arcade Fire’s
leading man Win Butler laments about bygone times when lovers used to pen each
other letters instead of hurl texts back and forth. Had he been born in a past era,
perhaps his frail soul would have found something else to wistfully ache for; as
it’s Butler belief
that artists shouldn’t provide easy answers; but rather pose hard questions.

After two unanimously
acclaimed albums (Funeral and Neon Bible) that cemented their status
as indie royalty, Arcade Fire’s third album comes as yet another effortlessly
enjoyable record. Like Funeral and Neon Bible, The Suburbs unfolds like a procedural-argument; this time
constructed around the themes of suburban purity vs. modern-life complexity. The fame and fortune
brought by the success of the earlier albums hasn’t shaken the band’s skeptic
worldview; in fact, it seems to have given them more issues to grapple with. Thus,
most of the finger-pointing in The
Suburbs is directed at the all-knowing kids who carried the band to the
throne of indie rock.

The Suburbs opens with a melancholy-laden title
track, where Butler
nostalgically sings about his innocent formative years; it’s the song
equivalent to a thesis statement. Next, Butler, his wife Régine and the rest of the eight piece outfit break down
the argument. The first half of the album has the weight of the world over its
shoulder. ‘Ready to Start’ launches an attack on the businessmen who ‘Are
drinking my blood/ Like the kids in art school said they would’ and then
‘Rococo’ blasts those very kids who ‘Seem wild but they are so tame.’

Before the
band gets bogged down by its own melodrama; it comes in with glimmers of hope. Butler shifts the blame
from the outside world and redirects it to himself in his musical ride around
suburbia. He embraces countryside joy with the same open arms. In ‘Deep Blue’
he’s back to his old town standing under the night sky. ‘Put the laptop down
for a while/ In the night there is something wild,’ Butler advises. Clear and direct, the song’s
words don’t hide behind a mask of detached metaphors. Instead, the lyrics pour out
with literal honesty.

If all the
longing didn’t tip you off, then the Arcade’s
music will. Swooping, grand, and precise, Arcade Fire’s sound is very much
grounded in the classical tradition of pop and rock with some songs foraying
into orchestral bars. The band displays an ambitious and highly textured sound
driven by strong melodies, exciting chord progression, and rhythmic drum
marches that match the sobering tone of their poetics.

The band
bookends the album by reprising the title track and concluding ‘If I could Have
it back/ All the time that we wasted/ I’d only waste it again.’

However, despite all
the malaise, Arcade’s post-irony sincerity imbues a delightful sense of
hopefulness.