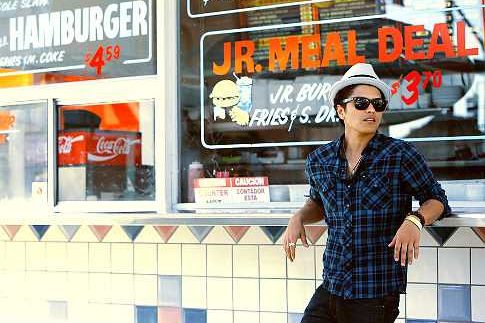 Cute as a button with a clean-cut image,
Mars’ style harkens back to the age of early pop, with enough auto-tune tweaks
and hot topic references to keep it in the 2000s. His tilted fedora and boyish
smile make Mars a shoe-in for pop heartthrob of the hour. However, a recent
arrest for cocaine possession and allusions to a darker side (he does cite Tupac
as one of his key influences, after all) might lend him just enough of a bad boy
edge to keep him intriguing.

This Hawaii native worked his way up
through the music industry, first establishing himself as a music producer for
big names such as Travis McCoy, Sean Kingston, Cee Lo Green (he produced
Green’s summer hit ‘F*** You’) and B.O.B.

Mars’ debut studio album Doo-Wops & Hooligans plays like a
collection of premium pop references, re-mastered with an expert hand. ‘Talking to the Moon’ has a little Chris
Martin; ‘The Lazy Song’ sounds a bit like Jason Mraz; the acoustic ‘Count on
Me’ even more so; ‘Liquor Store Blues’ is full of reggae pop with the help of
Damian Marley’s guest vocals.

The chart-topping ‘Just the Way You Are’
has enjoyed considerable airplay on international mainstream radio, and we can’t switch
on Nile FM without hearing the song. The track sums up all of Bruno Mars’
successful elements; clear vocals, cheeky sentimentality, and mass female
appeal as the guy who isn’t afraid to talk about his feelings and put it into
song. Could this song be a direct response to the Beyoncé/Alicia Keys
collaboration ‘Put it in a Love Song,’ which asked boys to grow up and tell
their ladies how they feel already? If so, he may be even more cunning than we
thought.

‘Our First Time’ branches out a little with
a reggae beat and some more varied vocal techniques, a bouncy chorus and
falsetto twists, playing with the musicality of the track rather than dwelling
on a lengthy pop strain. Granted, Mars’ lyrics stop short of
revolutionary: ‘Treat you like a princess/ Girl you’re so delicious/ Like ice
cream on a sunny day’ might make you squirm a little with its blatant
pop-cheesiness, but the charm lies in the honest pop that Mars produces.

‘Run Away Baby’ evokes the early music of
the late Michael Jackson, à la ‘The Way You Make Me Feel’ and ‘Beat It’.
Although Mars’ rock ‘n’ roll take is a little softer around the edges, he does
execute the pop king’s signature exaggerated gasp with precision.

As an album, Doo-Wops & Hooligans is well executed, polished and light.
However, it’s difficult to tell if the young Bruno Mars is still finding his
way or if he is just expertly shuffling the cards and trying on different
sounds for size.